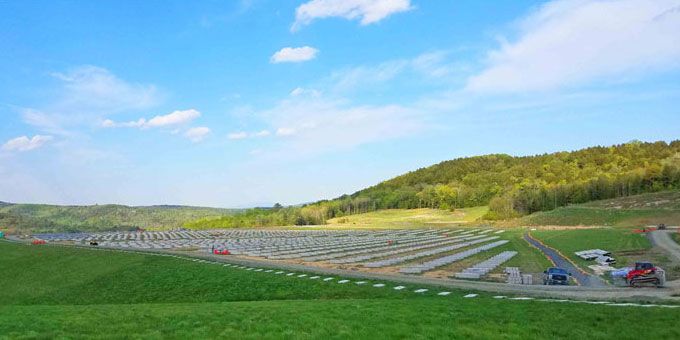 Beginning with a name like Superfund Project, already starts to make you think super heroes must somehow be involved. When you dig into the details of this project, in respect to the health of the residents, the local environment, and the achievement of this project – you wouldn’t be far off.

Let’s back up to 1809 to better understand this story. That’s when the Elizabeth Mining Company started operations extracting precious copper ore from the rock strata of Orange County, Vermont between the towns of Strafford and Thetford. The copper mining and smelting business was a thriving industry and, back in the day, a community of over 1,000 grew up around it. Elizabeth Mine yielded over 100 million pounds of low-grade ores making it one of the leading producers in Vermont during its era. In 1901, due to several factors, including the decline of the price of copper and continued financial and legal problems, the declining Elizabeth Mine closed. 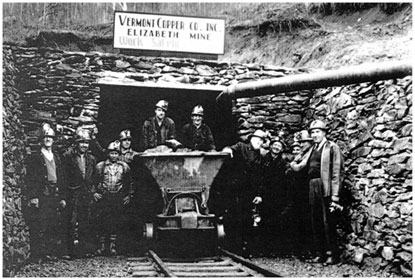 The abandoned mine, benchmarked in time and entwined with the region’s identity, is one of the largest intact historical mining sites in New England. However, there is an unfortunate consequence to this nostalgic landmark. Decomposition of minerals used in the smelting process and mining tailings were draining into the largest tributary of the Ompompanoosuc River’s west branch and impairing the water quality downstream. On the east side of Vermont, the 25-mile Ompompanoosuc is a tributary of the Connecticut River and flows into the Long Island Sound.

The Making of a Super Hero

The river has undergone extensive biomonitoring to understand the impacts to the streams by the abandoned copper mines. In 2001, the Elizabeth Mine was placed on the National Priorities List, a.k.a. the Superfund List. The Superfund Program is part of a federal effort to clean up polluted sites in the US that pose health and environmental threats from hazardous waste. The Environmental Protection Agency assesses candidates for clean-up through collaboration with local communities and authorities. Plans are formulated to address the complex issues and protect the communities and environments impacted. In 2014, there were 1,322 Superfund sites on the National Priorities List. 375 sites had been successfully cleaned up and removed from the list. Some of these projects are massive undertakings with no simple solutions and the byproduct of those efforts dramatically changed the landscape for the better- returning waters and land to healthier environments for all. In our minds, that makes the men and women who affected that change super heroes. 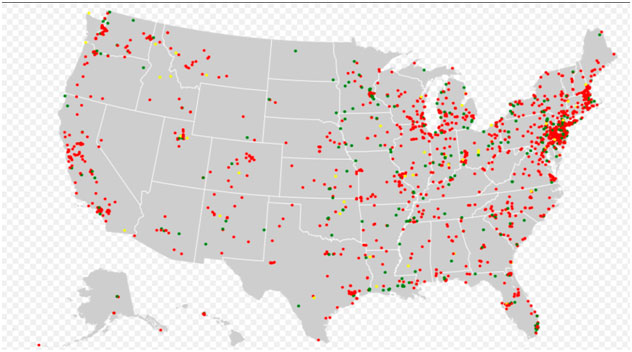 Clean Up Begins on the Elizabeth Mine Project

In 2010, engineering teams selected by the EPA and under contract with the U.S. Army Corps of Engineers, began a long and massive clean-up effort. The $70 Million project was focused on constructing surface and groundwater diversion structures, neutralizing tailing piles and capturing and treating contaminated discharge. The main project was to construct a 43-acre tailing and waste rock landfill and geosynthetic cap, along with wetlands mitigation and construction.

Superfund sites can be well suited sources for renewable energy projects where green remediation strategies can be employed in the clean-up. The Superfund Redevelopment Initiative helps communities reclaim and reuse contaminated land for a wide range of purposes including the generation of sustainable renewable energy. That is the case with the Elizabeth Mine Superfund Project.

In 2011, Wolfe Energy and Brightfields Development (Brightfields), approached the EPA and the Vermont Agency of Natural Resources (VTANR) about the Elizabeth Mines Superfund site and the potential of installing a distributed generation solar farm on the remediated site. In 2015, Wolf Energy and Brightfields brought in Greenwood Energy, a renewable energy project owner, investor and developer, to provide financing assistance and further development, design and construction experience.

Greenwood Energy, an alternative energy investor and developer with offices in Boston and New York, is dedicated to developing clean energy solar assets. With multiple projects in the eastern US and seven countries in Latin America, the Greenwood Energy team understands how to source and develop sustainable energy generation projects. They also have the expertise and resources to successfully operate and maintain a solar project of this nature. Multiple agencies and towns were engaged and required reviews, inspections and reports including the EPA, US Army Corps of Engineers (providing support to EPA), the VTANR, the Towns of Strafford and Thetford and the Vermont Public Service Board. However, working with many organizations to process work on the site was not the only challenge for this particular project. The geography and proximity of the site would introduce more difficult planning and construction hurtles.

The first challenge was the planning and design of the solar system. It needed to be constructed on top of the environmental (geosynthetic) cap of the mining site without damaging the cap. Greenwood Energy hired Conti Group to manage the final design and construction work. Conti Group were very experienced with the care and attention required for Superfund Projects. Superfund sites can double the required paperwork and review processes, but the benefits of the projects are invaluable to local environments and communities. The development team carefully analyzed the site location and topography. They reviewed modules and racking several times to ensure they were installing a system that would deliver the highest yields while providing the site with the lowest load levels. They selected Solar FlexRack for the utility-scale installation’s foundation, racking, and services due to their extensive experience with difficult landfill projects and their industry leading geotechnical and engineering staff. The site itself was in a remote location. It could be reached by driving over the mountain, to what anyone else would describe as, beautiful hilly countryside. However, to a solar installer this type of site creates numerous unique challenges.

After thorough analysis, Solar FlexRack’s pre-cast ballasted system, the best prescribed base to protect the installed remedial environmental cap, was selected for the 7-megaWatt solar farm’s foundation. 2,222 of these solar racking foundations were loaded and transported to the site – via those narrow, windy beautiful hills. It was critical that trucks stay the course and not drive into any areas that could create ruts or damage the integrity of the environmental cap. In preparation, Conti Group ordered grading and gravel work to stretches of the road to ensure trucks could reach designated delivery locations without issues. 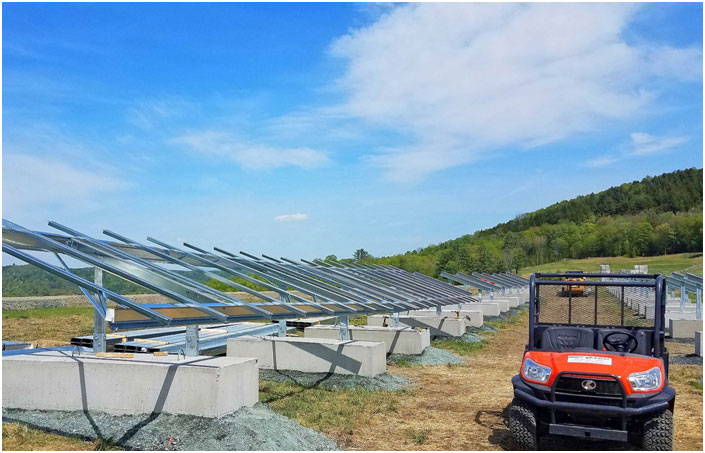 The third challenge was connecting the system to the grid. This large solar plant was located in a remote rural area and getting it connected to the local utility, Green Mountain Power, required an upgrade to the system. The project interconnection included an upgrade of approximately 4 miles of utility lines, 10 miles of dedicated fiber optic communications line and an upgrade to the regional substation. Green Mountain Power also upgraded three phase lines up through the town of Strafford as part of its reliability improvement program. The changes, in total, benefited the community with an improved electrical system that upgraded the reliability of the entire system.

The renewable solar energy project installed at Elizabeth Mine is generating enough electricity to power 1,200 homes annually. The project adds to Vermont’s renewable energy goals by utilizing otherwise unusable property to generate electricity. Civil, mechanical and electrical contractors were hired locally driving employment for local economies. Adding renewable energy to this remediation project is the perfect finishing touch to an incredible accomplishment transforming an unusable Superfund site to a productive and sustainable solar power generation plant for the community.

We can all sleep a little better after learning about this project and knowing there really are super heroes out there doing this kind of work every day.