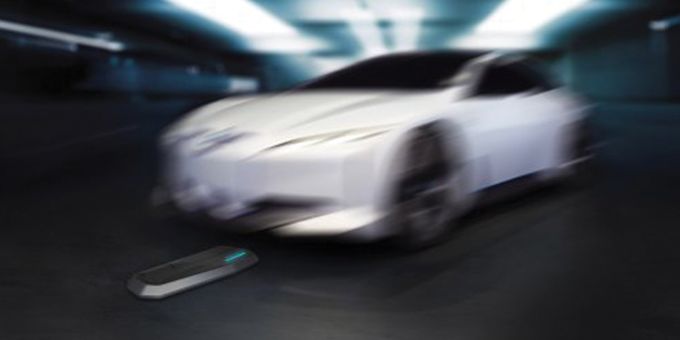 While electric mobility is becoming ever more popular, there is still room for developing functional standard technologies in some areas. One such example is the way cars are charged: nobody wants to see streets littered with charging stations. And while inductive charging is largely hidden from view, it comes with some significant disadvantages. Here Volterio offers an efficient alternative that makes sense. The prototype of the charging robot moves using FAULHABER motors.

Charging stations can be an eyesore in inner cities, and the bulky cables and plugs can also be an inconvenience in people's garages. Contactless inductive charging with coils embedded in the garage floor or the road surface has none of these visual or mechanical annoyances. But unfortunately it comes at a heavy price, and in more than one way: making the coils disappear means the ground has to be opened up and refinished; the maximum output is currently three kilowatts in most cases, which can result in long charging times; and with this type of charging, a significant portion of the power is lost compared to plug-in cables. This loss is even higher if the car is not parked right over a coil. 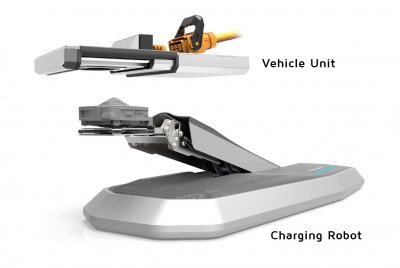 The technology from Volterio offers an elegant solution to all of these problems. When inactive, the charger is an inconspicuous, only 6-cm high structure on the floor. The car is then parked over it for charging. Next, a robot arm extends telescopically. At the end of this arm is a connector which seeks its counterpart on the car's underbody. The two components have previously exchanged information with each other via encrypted wireless communication. And since the conical-round current carrier is not a connector in the traditional sense, it is still able to make full contact even if the car is not parked in the optimal position. An ultrasonic system is used to make sure that the arm accurately finds its target. The connection is established in less than 15 seconds. 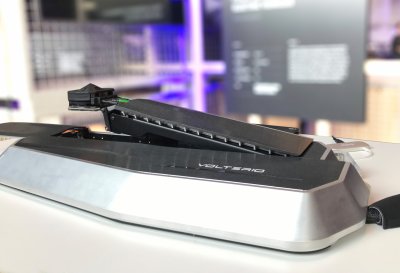 The connector must simply be within a range of 50x50 cm, and the car can even be parked at an angle. It is also possible to embed the entire unit in the floor for new constructions of garages or parking spots. The charging capacity of a charger with home connection is 22 kilowatts, which means that even the largest car batteries can be fully charged in 4-5 hours. The technology itself is designed to handle up 100 kilowatts DC, which lowers the charging time to an hour.

The idea behind Volterio stems from a master thesis that Christian Flechl wrote in 2014 at the Graz University of Technology (Austria). Today, he is the Managing Director of VOLTERIO GmbH, and his product is about to go into series production. An important aspect in the development of the prototype was the three motors that move the robot arm along the three axes: “We wanted to build a device that was as flat as possible, so there was very little space available from the beginning”, the young graduate engineer recounts. “At the same time, we need to move considerable weight. So the motors – in conjunction with the appropriate gearhead – have to offer high torque, high speed and be small in size.”

A search on the Internet quickly led him to FAULHABER, as not many companies are able to meet these types of specifications. “In talks with other experts I was reassured that FAULHABER was the way to go, and that became even more evident when we started working together. FAULHABER sponsored the entire project with extensive technical advice, selecting the right motors, and by offering the motors themselves.” DC-micromotors with planetary gearheads and a suitable motion controller were installed in the prototypes. In addition to that, FAULHABER selected and provided other drives for testing purposes. 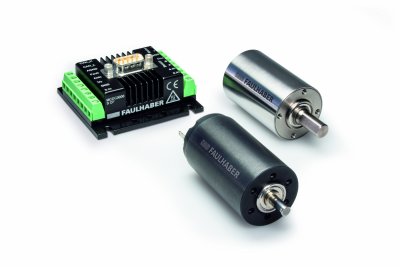 The high motor performance of the CR series is based on a very stable graphite commutation with low wear, powerful neodymium magnets, and a particularly high ratio of copper in the winding. The charging station is designed for about 20,000 cycles. This means only about 1% of the service life of the drives is used. Their robustness is also very important, because the Volterio units must work reliably even after long standstills and in harsh weather conditions.

The prototype performed very well in extensive testing. In pivotal aspects, the technology is far superior to competing concepts. Several manufacturers of premium cars agree. They are already preparing to have the chargers go into series production. Volterio is now working on new challenges: “Automated charging processes can be used in many different ways”, Christian Flechl explains. “This is true for the entire field of logistics as well as for all driverless vehicles. Solutions for electric trucks are under development as well. We are developing suitable charging robots, and we continue to rely on the valuable support of FAULHABER.”

About FAULHABER
The FAULHABER Group offers the world's largest consolidated portfolio of miniature and micro drive system technologies available from one partner in the world today. The Group specializes in the design and manufacture of complex, high precision miniature and micro drive systems for challenging areas of application like medical devices, handling automation, telecommunications, and precision optics.