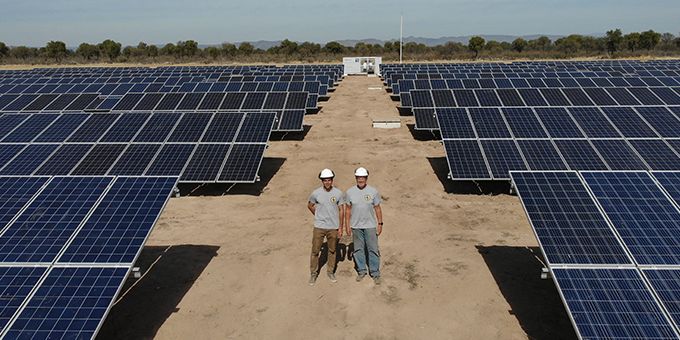 Near Quines Argentina, in the San Luis province sits a property used for cattle ranching and pivot irrigation for agriculture. To keep the property self-reliant, the food has long been grown onsite to feed the cattle. As of September 2019, the ranch is even more sustainable after opening its own self-generating solar project.

Developed and installed by MWh Solar, an Argentinian energy company, the project took more than two years of planning as energy laws and regulations evolved. In the past, diesel generators were used to produce the electricity required to pump the water and move industrial sprinklers – called pivots — to circulate the irrigation. However, once grid electricity was available, the ranch moved from diesel generation to 100% grid supplied electricity. Unfortunately, the electrical tariffs for irrigation are amongst the highest in the country.  The farmer realized it would be more cost-effective and environmentally sound to begin sourcing their electricity from the sun. Impressively, the new solar system provides enough energy to irrigate 450 hectares (1,112 acres) of corn, oat and pastures for cattle ranching.

“The electricity needed to pump water and to move the pivots was one of the largest expenditures for the ranch,” said Howard Foy, chief executive officer of MWh Solar. “We analyzed ways to use innovation and technology to replace the extremely high cost electricity supplied by the grid and developed the BTM (behind-the-meter) self-generating solution.”

Ultimately, that analysis led to the recently installed project. The total size of the array is 600 kWp and 450 kWac.

The estimated annual kilowatt-hours are roughly 1,020,000, which is projected to offset at least 45 percent of the total energy use. The Jinko 335 Wp Poly was selected along with nine SMA Sunny Tripower CORE1 units and one SMA Data Manager M for monitoring and control. The CORE1 is the world’s first freestanding string inverter for decentralized rooftop and ground-based PV systems. This design allows for reductions in installation time and lowers total cost of ownership.

The project has gained regional attention and was even visited by the minister of agriculture in Argentina. He was so delighted with the sustainability that he tweeted, “This is the first solar energy plant for self-consumption in the country!”

According to the ranch, the choice for solar stood out right away when they first started considering the environment and weather in San Luis. The sunlight provides a more reliable source of energy than wind in the region, and the initial costs were much lower for solar power compared to wind-powered options. Plus, the maintenance for solar was also projected to be much lower, making it a no-brainer.

“SMA was selected because of our easy installation, superior support and quality,” said Jorge Garcia Huidobro, the sales manager for SMA South America. “We’re proud to be part of a project that is paving the way in Argentina and earning a great deal of positive attention.”