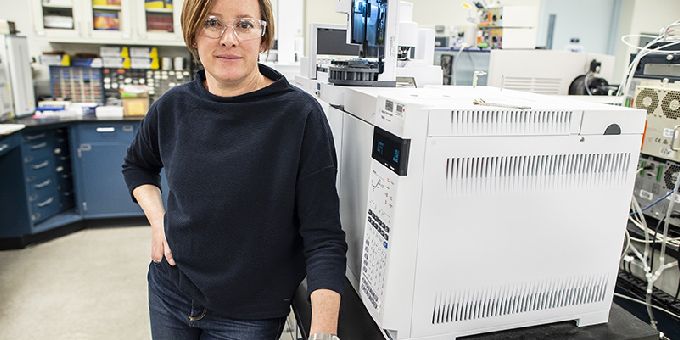 A year into their unique collaboration, NREL and ExxonMobil are navigating a multi-pronged effort toward a future where clean-burning biofuels replace some petroleum-based fuels. The two have agreements in place covering the gamut from increasing the productivity of algae to understanding pollutants associated with different aspects of refining cellulosic biomass into a fuel.

“We’ve both been focused on algae biofuels for many years, so we’re sort of joining forces to help each other,” said Lieve Laurens, a biochemist and head of NREL’s algae program.

ExxonMobil is working to create long-term options for low-emission fuels, which are scalable, minimize the drain on natural resources, and have low emissions both in the final use as well as during the production process. NREL, meanwhile, is dedicated to improving energy efficiency across multiple fronts and exploring alternative ways to fuel the future. These overlapping interests, and more, brought ExxonMobil to the partnership with NREL in May 2019.

NREL regularly collaborates with private companies, along with universities, state and local governments, and federal agencies, but the size of the arrangement with ExxonMobil stands out. The Texas company last summer pledged up to $100 million over 10 years for research at NREL, the National Energy Technology Laboratory, and other labs across the Department of Energy (DOE) complex. In its 2019 annual report issued earlier this year, ExxonMobil noted the billions of dollars being invested globally “to prevent and minimize the impact of our operations on air, water, and ground.” The NREL relationship is an important piece of the strategy.

Sarah Torkamani, a researcher with ExxonMobil Research & Engineering Company (EMRE), is among the company’s employees collaborating with NREL. Her project involves converting agricultural residue such as corn stover—the inedible parts of the plant—into biofuels, biochemicals, or other products.

“The carbon footprint of these products is lower than products that were made from fossil-based feedstocks,” she said. “For example, instead of using gasoline that is made from crude oil, we can use biofuels and their carbon footprint could be at least 60% lower than gasoline. The main objective is to advance these technologies to a stage where we can competitively produce these bio-based products in order to reduce greenhouse gas emissions.”

ExxonMobil already found a strain of algae that Laurens describes as “one of the fastest growing algae we have encountered.” But that is merely the starting point for the questions she has, including: “Can we understand what makes it so fast and then translate this to other species?”

Algae stand out as a beginning for the production of biofuels. With thousands upon thousands of natural strains around the world and an ability to grow in various types of water, however, algae do not provide an easy solution. Algae store energy absorbed from sunlight as oils, which can be extracted and processed to produce a biofuel. As another plus for relying on the species, algae feed on carbon dioxide (CO2) and remove it from the atmosphere at a ratio of approximately two tons of CO2 for every ton of algal biomass.

The three-year algae project between NREL and ExxonMobil began in January. 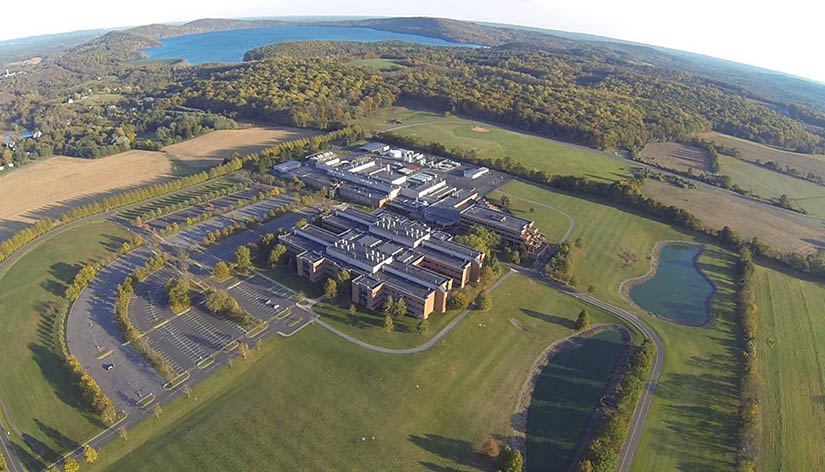 In addition to understanding and improving how algae grow in the lab, NREL will be helping address some key challenges of scale-up with ExxonMobil. Algae can be cultivated indoors, but in order to scale it up for biofuels, the work needs to move outside. Cultivating algae at large scale requires very large custom-designed ponds or bioreactors in which the strains are grown and impacted by the environment with varying sunlight, CO2, and nutrients in the water. With so many variables, scientists at NREL will be relying on computational fluid dynamics modeling to better understand the interaction of physical mixing of algae and other environmental factors that can aid algae growth outdoors.

“There’s a big difference between growing algae indoors vs. cultivating it outdoors,” said Ruby Carrillo, a senior researcher at EMRE.

The use of computer modeling will allow researchers to understand the complex variables related to cultivating the algae in an algae farm.

“We could understand the impact of different conditions at different geographies using models,” Laurens said. “We can do all that computationally. This could eventually help ExxonMobil be more efficient in selecting locations and optimizing the conditions for growing algae outdoors.”

Carrillo said the expertise at NREL in computer modeling complements the contributions EMRE provides in the fields of engineering, biology, and outdoor cultivation.

Bob McCormick, a senior research fellow at NREL who leads the laboratory’s advanced fuels and combustion research, remembers when he received a call from ExxonMobil in October 2018. The energy company was interested in having NREL perform research to understand the combustion properties of novel fuels like biofuels. A follow-up visit three months later brought more than a dozen ExxonMobil employees to NREL.

The two organizations began working on the three-year biofuel combustion project in February.

“I would hope that by the end of three years, we will be in a pretty good position to predict how to improve performance of biofuels,” said Alan Schilowitz, a scientific advisor with EMRE.

Diesel fuel powers heavy-duty trucks that carry supplies and goods across the United States, and the enormous weights of those loads make it difficult to electrify those fleets, he said. “You don’t want to take up a significant part of the payload with a battery.” Schilowitz said the goal is not to entirely replace diesel fuel. “We want to replace a significant portion of current diesel fuel with a bio alternative.”

While hundreds of molecular compounds go into gasoline, diesel fuel is more complex with thousands of compounds. As part of the ExxonMobil collaboration, NREL researchers will be conducting fundamental research in assessing the performance of bio-derived diesel fuels, considering such factors as how much soot a fuel will produce or the amount of hydrocarbon emissions. Experiments will provide some of that information; computer models will predict properties of other potential bio-diesel fuels.

“If you have a really good fuel predictive model,” McCormick said, “then that saves a lot of time in development.”

When It Is Time To Make Biofuels

Even before ExxonMobil nails down the optimum biofuel derived from algae, corn stover, or another feedstock, the company already is considering the refinery process. Just as a petroleum refinery distills crude into fuels, a similar process must take place at a biorefinery. Vital to opening and operating a biorefinery will be minimizing emissions.

Garvin Heath, a senior scientist at NREL whose expertise includes air-quality modeling, is helping ExxonMobil with those considerations. “They have expertise, clearly, from operating petroleum refineries, but they also have done a lot of research into biofuels and the refining of biofuels,” he said.

The three-year biorefinery project began near the end of 2019.

The Environmental Protection Agency has established National Ambient Air Quality Standards (NAAQS) for six principal pollutants, including particle pollution and carbon monoxide, so any biorefinery must meet those standards. Computer modeling will allow NREL researchers to determine how to design biorefinery processes to meet the emissions and federal air pollutant regulations.

Cynthia Randles, an advanced-research associate at EMRE, said because air pollutants have a short lifetime and the effects are most felt by people living near and downwind from the source, that influences everything from the design of a bioreactor, its size, where it is located, and the type of feedstocks that are used.

Funding for biofuels research at NREL traditionally has come from the Bioenergy Technologies Office within the Department of Energy. The additional funds from ExxonMobil will enable NREL to conduct novel research into the tradeoffs between traditional air pollutant emissions and greenhouse gases, for example.

“There are a bunch of things the partnership with ExxonMobil will allow us to do,” Heath said. “It has accelerated the research and expanded the boundaries of the research.”

Wherever the research leads, the unique partnership has embarked on a path that could lead to dramatic innovations for the future.