The tech titans – Amazon, Apple, Facebook, Google, Microsoft- have always been at the forefront of renewable energy procurement, and recently mid-sized companies like Salesforce have also pushed the industry forward. 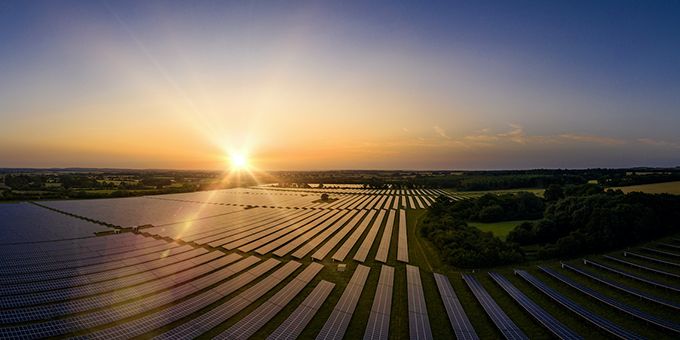 5 Predictions for the Corporate Renewable Energy Market in 2021

If you want to predict where the renewable energy industry is headed, you simply have to look toward the world’s largest technology companies. The tech titans – Amazon, Apple, Facebook, Google, Microsoft- have always been at the forefront of renewable energy procurement, and recently mid-sized companies like Salesforce have also pushed the industry forward. As the world’s largest purchasers of electricity, they’ve wielded their immense buying power to transform the industry. They set the bar when it comes to corporate sustainability goals, and every year they move that bar higher. As we head into 2021, these are the new goalposts that we predict corporate renewable energy buyers will be striving toward as a result of the tech titan’s leadership.

1. Social Justice Will Be a Key Consideration in Renewable Energy Procurement 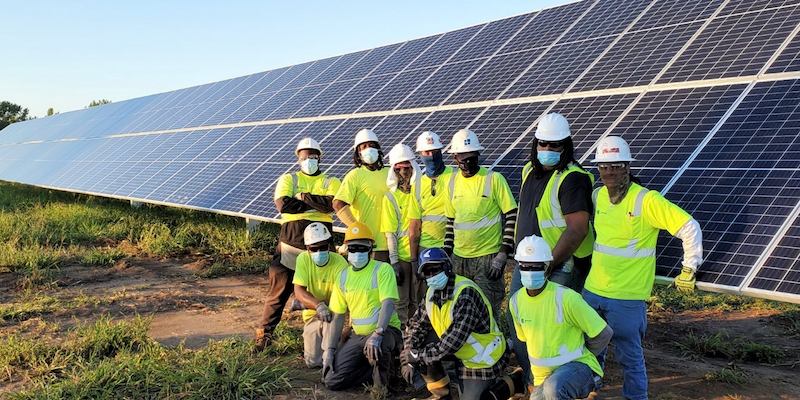 Image via Renewables Forward, which aims to increase diversity and inclusion in the industry

The Black Lives Matter movement and George Floyd protests have sent ripples through every industry and every boardroom, affecting issues far beyond police brutality. Companies are not only taking a deeper look at the diversity of their own employees, they’re also reevaluating how they advocate for social justice through their business practices and procurement.

When it comes to renewable energy, Microsoft has established an innovative model that we anticipate others will follow. In July, Microsoft committed to develop a portfolio of 500 megawatts of solar energy projects in under-resourced communities in the U.S., working with local leaders and prioritizing minority and women-owned businesses. The company will also aim to procure in “communities that are economically under-resourced, disproportionately impacted by pollution and/or lack access to the benefits of the clean energy transition.” Another leader in this space is Salesforce, which recently published its “More than a Megawatt” paper, which provides a starting framework and expert third-party guidance on how to maximize the positive impacts of renewable energy purchases and minimize the negative impacts.

They’re not the only ones. This year LevelTen has been asked by multiple corporate buyers to evaluate social justice criteria when selecting a renewable energy project for a power purchase agreement. These buyers not only want to know how the project will positively impact the community — like reducing pollution, generating tax revenue, and creating jobs — they also want to know how the developer of the project treats its employees, including diversity and fair pay. They also want to ensure that the developer creates supply chain accountability, and adheres to responsible business practices.

To be more competitive, developers will have to reevaluate their own businesses, and many are already starting to do so. Just a few weeks ago, a group of leading renewable energy companies and trade organizations launched an initiative called Renewables Forward, which will develop concrete steps to increase workforce diversity and inclusion throughout the industry.

2. More Companies Will Aim to Be 100% Renewable: At All Times 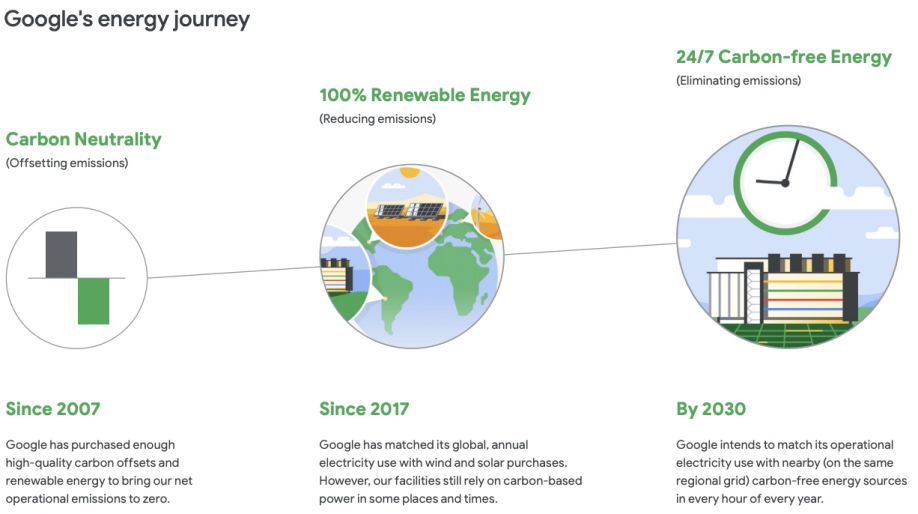 First the goal was to be carbon neutral. Then 100% renewable. Then carbon negative. And now, thanks to Google, the new goal is to become 100% renewable every hour of every day. Companies can claim they’re “100% renewable” by purchasing enough clean energy to cover the amount of energy they use on an annual basis – not an hourly basis. In other words, “100% renewable” means that in many hours of the day companies are consuming more than the renewable energy they’re buying. So, even though these companies may have achieved a “100% renewable” goal, fossil fuels are required to support their energy demand so that you can watch a cat video on YouTube, do some online shopping on Amazon, email your coworker on Outlook, or surf Facebook on your iPhone at night. Every technology company contributes to this.

Google wants to eliminate the need for fossil fuels all together by matching the time of renewable energy generation to the time the energy is consumed. To get there, the company has developed new technology that shifts the electricity demands of its largest data centers to match clean energy supply. The company is also looking for ways to improve its renewable energy procurement through PPAs. In Google’s white paper outlining it’s strategy for 24/7 clean energy, the company stated:

“In 2010, Google signed its first Power Purchase Agreement (PPA) for electricity from an Iowa wind farm, helping to popularize a tool that has since become a mainstay for companies that purchase renewable energy. Yet as important as traditional PPAs have been and will continue to be, they also have limitations. We can break down barriers that prevent Google and others from buying clean energy by developing new transactional approaches, such as: 1) moving from single-source PPAs to multi-source and multi-technology blended PPAs, 2) creating utility programs to enable broader access to affordable clean energy, and 3) developing new models where multiple users can share clean energy assets.”

Fortunately, new technology doesn’t need to be invented to achieve this: The LevelTen platform facilitates all of these types of transactions for our partners.

Scope 3 emissions are those caused by the production and use of a company’s products, and are often the largest source of emissions for a company. For example, Scope 3 emissions from manufacturing make up about 75 percent of Apple’s overall carbon footprint. Unlike Scope 1 and 2 emissions, which a corporation can reduce through energy efficiency measures and renewable energy procurement, Scope 3 emissions are out of the company’s direct control, so they are the most difficult to reduce. That’s not stopping them from trying.

Apple, for example, has a goal to transition the electricity used across its entire manufacturing supply chain to 100 percent renewable sources by 2030. Through Apple’s Supplier Clean Energy Program, 71 manufacturing partners in 17 countries have committed to 100 percent renewable energy for Apple production. As a result of the program, in August, Taiwan Semiconductor Manufacturing Company, an Apple supplier, signed the largest corporate PPA to-date, a 20-year contract for the entire output of a 920 MW offshore wind farm owned by Ørsted in Taiwan.

Amazon, Facebook, Google and Microsoft have also committed to reducing emissions in their supply chain, and given the size of their supply chains, this is going to have massive repercussions around the world. Their suppliers in Europe and Asia are turning to renewable energy procurement for the first time, transforming global energy markets. According to BloombergNEF, the first half of 2020 saw significantly higher volumes of procurement in Europe, Australia and Taiwan than last year.

One way corporations can assist their suppliers in purchasing clean energy is through buyer aggregation; the corporation can team up with multiple suppliers to purchase the entire output of a project. LevelTen has facilitated aggregated deals and is receiving growing interest from corporations looking for supply chain solutions.

4. Storage Will Be Added to PPA Portfolios

In 2021, corporations won’t just be signing PPAs with wind and solar projects, they’ll also be doing deals with utility-scale storage projects. LevelTen has helped clients enter into storage agreements this year, and together with our partners, we expect more to come in 2021.

There are a few reasons for this:

Although Facebook hasn’t publicly announced any storage contracts, it is investing in the technology. Facebook and Carnegie Mellon University recently announced that they are trying to use artificial intelligence to find new “electrocatalysts” that can help to store electricity generated by renewable energy sources. In addition to the technical challenges of storing energy, grid infrastructure and utilities will need to adapt to the new capabilities. But with the right policies and regulatory frameworks in place, the energy storage industry is expected to boom, and corporations will help fuel that growth.

5. The Need for Speed Will Drive Innovation

Many of the tech companies’ most ambitious sustainability targets are set for 2030. While a decade may feel like a long time, it can take years to develop, finance and build a new renewable energy project. At the same time, these companies have to keep up with a constantly-growing demand for energy. It’s not enough to cover their current energy usage, they also need to be prepared to cover what they’ll be using years from now. Corporations are up against the clock, and can’t sign deals fast enough. The current PPA process is too manual and time consuming to meet their needs. We predict that new solutions will arise, either from the tech titans themselves or from other market participants, to facilitate faster renewable energy transactions.

LevelTen’s mission has always been to accelerate the transition to renewable energy by taking the friction out of the procurement process. We created the largest PPA marketplace in the world, we developed sophisticated analytics required to compare all of the options, and we created standard contracts that meet all parties’ needs. We’re building the renewable transaction infrastructure required to get deals done quickly, and we’re just getting started. Together with our partners, we can accelerate the clean energy transition. 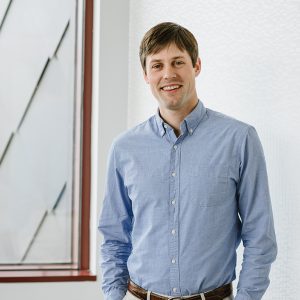 About Rob Collier
Rob is the Vice President of Developer Relations at LevelTen Energy. Prior to joining LevelTen, Rob worked for utility-scale solar developer OneEnergy Renewables in various capacities, most recently as director of development.