Generally Dual-axis trackers are more accurate in pointing directly at the sun which is usually the brightest spot in the sky, however, Dual axis comes at the price of higher complexity and lower reliability ( more down time and more maintenance) than single axis.

What are the basic pros and cons of single axis vs. dual axis solar tracking systems?

There are mostly "pros" for both . . .but you need to use the right system for the right reasons. Generally Dual-axis trackers are more accurate in pointing directly at the sun which is usually the brightest spot in the sky, however, Dual axis comes at the price of higher complexity and lower reliability ( more down time and more maintenance) than single axis. On the other hand single axis offers lower cost and higher reliability since there are fewer things that can go wrong over the life of the system . . . which may be expected to exceed 20years or more. Watch a group of dual axis trackers in an overcast day and you'll see them pointing all over the sky. Meanwhile, a group of single axis trackers will be all facing the same direction and producing about the same amount of energy per hour with a lot less wear and tear.

Does geographic location affect the choice of one over the other?

Yes that is the most important difference in the two approaches. It depends on where you are on the earth. In specular light regions, ie desert and equatorial sites the atmosphere is normally clearer. It has a high "Sky Clearness Index" greater than .7 to .8 or more.

What is Sky Clarity Index and why is that important to solar trackers?

Sky Clarity is a measure of how much pollution, clouds an weather absorb, reflect or refract the sun's energy. Low clarity is "diffuse light" like a hazy or overcast day. High clarity, above .7 or .8 is a very sunny day with little pollution or particulate in the atmosphere. This is "specular light", full-on bright sunlight. Here, dual axis earns it's keep and can achieve production of 40-45% more than a fixed roof array that is tilted ideally for the latitude. But most of the developed world live in temperate climates where the Sky Clearness Index is rarely better than .5 like most of North America, not counting the sunny southwest US. In Ontario, Canada for example, with a Sky Clearness Index of .35 in winter and maximum .5 in summer, pointing directly at the sun in azimuth captures over 96% of the energy as a dual tracker with a lot higher reliability because it has fewer components. Here's what I mean. The following chart is based on a detailed study of over 180 solar sites around North America, done by Dr David Lubitz, Assistant Professor of Engineering at University of Guelph in Ontario. The full report and detailed analysis is available from an academic publishing site www.elsevier.com. 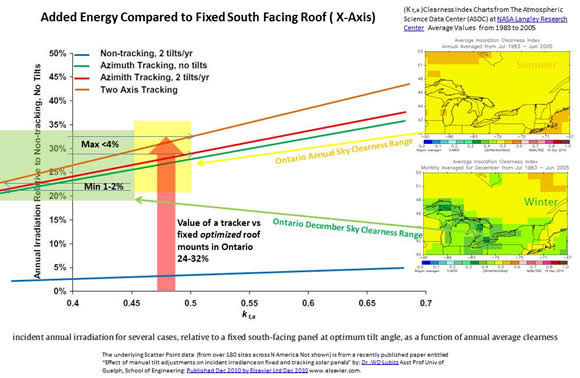 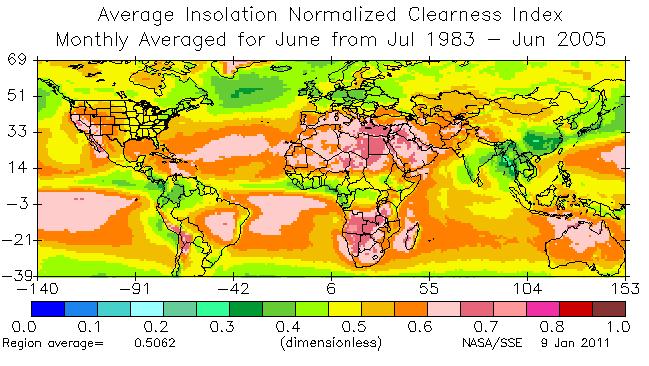 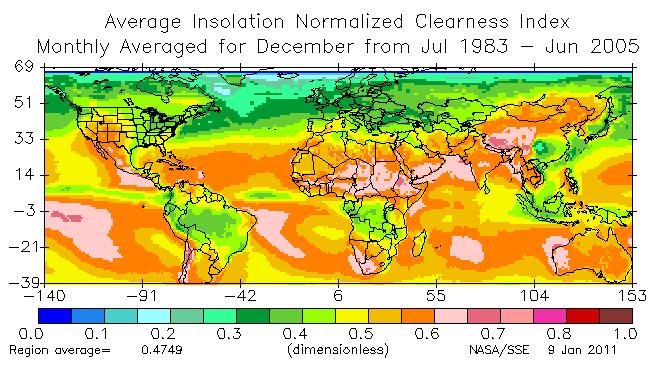 What does MTBF mean to maximizing my payback?

MTBF is Mean TIme Between Failure. It's a measure of how reliable a system is. If things break or need maintenance often then a low MTBF system will cost more to operate and maintain and produce less energy than equipment with a long MTBF. Generally, the more down time the less energy is produced and the longer it takes to achieve payback and profit.

How do I achieve the lowest "life-cycle" cost and why do I want that?

Ideally you want a system with the fewest components and the highest MTBF since it will produce more energy and revenue if it operates closer to 100% of the available time. Backup systems and redundancy helps achieve more UP time but eventually the cost of these extra components will outweigh the higher reliability they offer. You can still have more failure with more systems but if their redundancy is planned properly then the MTBF may be higher but the UP time is also so you pay for that reliability with the extra systems. To gain the most benefit for the least money, look for systems with fewest components but also components with the highest MTBF so fewer back up systems or failure sensors are needed. Remember sensors can fail too and lead to further breakdowns, and all of them contribute to the System MTBF.

Which panel design is better or does it matter if I use Mono or Polycrystalline technology . . . why not the newest "cheaper cost per watt" thin film panels?

Generally mono chrystalline panels do a bit better in low light or diffuse light environments . . but only marginally. Poly Chrystalline panels are great in both diffuse light and specular light but offer a slight production advantage possibly if they cost less. Cheaper Thin Film technology is only a better value if you are installing MEGAwatts because they are lower density, that is, fewer watts per sq meter and so the cost of the mounts needed to hold the same amount of Kws in a larger area is higher. Generally industry analysis recently is indicating that thin film's financial advantages of cheap manufacutring are not being realized as much as the industry had hoped.

What about inverters, does design make a difference or is the price the only thing that matters?

Price is definintely NOT the only thing that matters here. Cheaper inverters, not matched to the panel performance will cause your array to not produce what it could. Strings of panels together in series must closely match the inverters power performance curve and that can be quite a wide range between -20C in the winter and +40C in the summer. 1 kW at -20C on a cold sunny day in Feb can produce over 1.2kW/hour while a roof mounted overheated array of the same size might only produce 750-800 watts when the temperature is above 30-40C. All of this value in cold weather can be wasted if the inverter/ panel string performance is not right for the equipment choices. Check the inverter web sites and look at their string matching charts or calculators for the panel choices you have and see what they recommend to get the most out of their inverter.

What about Enphase inverters? Are they not the latest and best inverter technology?

Enphase is great innovation and Enphase is a great company too. One inverter per panel makes string matching unnecessary but there's no point really in putting a 250w panel in a 190w inverter if the inverter cannot produce the other 60 watts. It will peak earlier in the morning and stay maximized longer in the day but you can't get more than 190 watts from it no matter what you do, so choose a panel closer to 210-215 and no more than about 230w to get the most out of enphase. They have a great system monitoring system with on line archiving and reporting but don't forget all that comes at a price off the bottom line. The only thing I would be conserned about is the fact that if you are doing this for MicroFIT or some other long term Feed In Tariff program consider that they are the ONLY option at this time and before long there will be other micro-inverter players in the industry with other micro-inverter designs The world standard for interfaces and communications has not yet been established for micro-inverters the way it has been for years in the conventional inverter industry. . . and you are betting that enphase will be the STANDARD the same way people bet on the Sony Betamax video tape recorder (which was actually better technology than VHS) only to find 3-4 years later that VHS became the world standard for video tape . . that is, until CDs and DVD made them both obsolete. The difference here is it's not 200-300 dollars video recorder we are talking about. It's a $100,000 revenue generating system that is supposed to be operating for 20 years or more. In 5-10 years there may be a whole new approach to panel inverters and if you chose enphase there will only be one number to call for help and their innovative original design may be obsolete even to Enphase.

Where do you see the solar industry headed in the near and distant future in North America?

You might be surprised to know what I think. I think that the solar industry in North America is headed for rough water. The business of power generation has been monoplized by governments and major utilities and both are lothe to give up their "control" of the power. It not so much about the control of power as it is about "The Power of Control". The North American grid has been shown to be fragile ( Aug 2004) and the aging collection of transformers, wire and generators leave ample means for them ( both governments and utilities) to go slowly and methodically, to raise barriers and exceptions, to manipulate public opinion by claiming complexity and safety as the driving interest while they manipulate price schemes to pay for improvements. Politicians also play a role, being influenced by lobbyists and special interest to the point they don't know what to do and often make technical mistakes based on fear of public opinion. Classic was the decision to reward roof mounted solar with the highest price per watt even thought it's the least effcient and least practical method for mounting panels in a climate with 3-4 months of snow cover. Constant juggling of requirements and inconsistent pricing decisions have virtuallyu destroyed any long term confidence in Ontario's MicroFIT propram and the Ontario Green Energy Act . . as laudable is it's intent originally was. . . .rough seas ahead.

Ultimately, solar and wind is the RIGHT decision. Centrally generated power is becoming a thing of the past. Renewables are not yet able to replace concentrated demand like industry and major urban spawl, but . . . . People don't yet appreciate that energy from the wind and sun is everyone's RIGHT! Like the clean air we are entitled to breath and the clean water we have a right to drink, clean energy is everyone right without taxation or interference from anyone. So the future is FREE energy for most of the planet because, once you own the equipment the energy is free . . forever. . .as long as we use it for our personal benefit. Sell it and that becomes commerce, but use it and it's your's to waste.