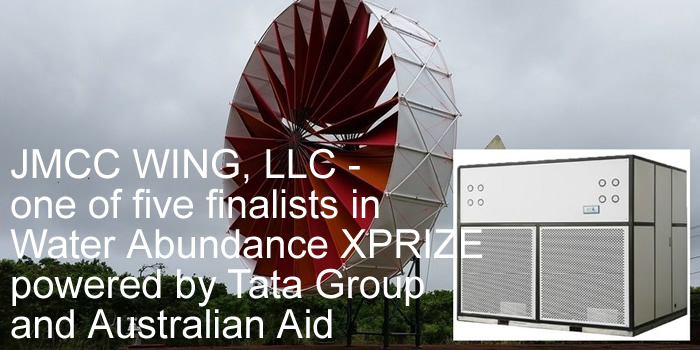 Using two technology advancements, JMCC WING, LLC (Delaware) qualified for a $50,000 Milestone Award in the Water Abundance XPRIZE powered by Tata Group and Australian Aid.  The competition began with 98 teams worldwide and now five finalist teams have been selected to compete in the final round for the $1.5 Million Grand Prize this July (2018) to efficiently harvest water from air using renewable energy.  The McCanney WING Generator (Patents pending – JMCC WINGTM) is the power source for their line of Atmospheric Water Generators.   This ushers in "The Jet Age of Wind Energy" according to owner and inventor Physicist James McCanney.

The WING is Eco-Friendly.  Birds see it and fly around.  There will be only a few not thousands covering the landscape.  They are graceful and beautiful people love to watch them.  They are silent (no high vibration or noise).

McCanney states that since the WING works efficiently from low to very high wind speeds, its patented design extracts far more energy than previous wind generators.  The cost per unit of energy goes down exponentially with increasing size.   His "Distributed Energy" philosophy, published in his 2009 book "McCanney WING Generator – World Energy Project", shows how one day a distributed network of large WING Generators will power all our energy needs including electric transportation, while providing clean water for the world.

There is an Indiegogo Fund Raiser to help the JMCC WING team win the Water Abundance XPRIZE competition.  You can help make this happen.