Known as GIGA Rhino, the system will enable increased amounts of renewable energy on the grid, making it more stable through balancing the local smart grid.

The Water Abundance XPRIZE requires the atmospheric water to cost less than two cents per liter using only renewable energy. Teams cannot use grid power. Standard alternative energy sources such as the three blade wind generators or solar are far too expensive to meet this low figure. 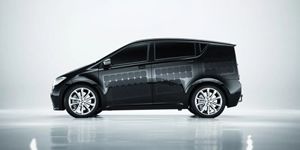 This technique is projected to reduce solar panel manufacturing costs by upwards of 60% compared to industry standards, while making them 25% more efficient, and resulting in a very cost-effective source of energy.

Orison, an energy storage company, announced today that the first true plug-and-play energy storage system is now available for pre-order on Kickstarter. Orison powers homes and businesses to reduce energy costs, provide backup energy during blackouts, and contribute to a clean energy future. The Orison Kickstarter Campaign can be found at: http://kck.st/1Kr9Zn5   Orison envisions a future with abundant, clean, and affordable energy for all. The networked, distributed energy storage solution gives consumers control so they can store energy from any electricity source, including grid or solar power, to access energy whenever it's needed. When powered by the grid, it stores energy when utility rates are low to power homes and businesses when rates are high. If connected to solar, Orison allows consumers to locally store the energy they produce so that it will not be sold at a loss to the utility. By localizing energy distribution, Orison helps to save money and reduce peak demand.   Full Press Release:

Here are a few alternative energy crowd funding projects that you may find interesting. RE-volv is a nonprofit organization whose mission is to empower people and communities to invest collectively in renewable energy. RE-volv finances solar energy projects for nonprofits and worker-owned cooperatives that serve their community through a 20 year solar lease agreement.