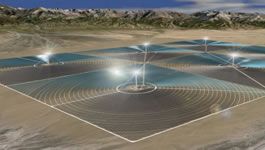 Oliver W heaton for Metro.co.uk:  The massive solar plant, which will stretch out across the Gobi desert in the country’s Quinghai province, will cover 25 square kilometres of vacant ground space. When finished the plant, called Delingha, is expected to have a capacity of 200 megawatts, which means it will power one million households all year round. Delingha is the world’s first solar power plant to be run as a commercial entity after being jointly developed by BrightSource Energy from California and the Shanghai Electric Group in China. The awesome structure will have six huge towers as well as thousands of solar mirrors which, due to their heat storage time of 15 hours, will be able to guarantee ‘stable and continual power generation’, according to Qinghai Solar-Thermal Power Group board chair, Wu Longyi.   Cont'd...

07/29/15, 11:33 AM | Solar Power, Other Renewables | project development | Martifer Solar USA
The 57 MWp portfolio consists of four solar PV projects located near the cities of Maan and Mafraq, Jordan---- The four projects, which were awarded PPAs under Round 1 of Jordans National Renewable Energy Plan, not only are receiving support from the World Bank Group through MIGA investment guarantees, but also are part of the IFCs innovative $207 million debt financing package

Indiana Based Inovateus Solar to Install the First of Four Solar Projects for Indiana Michigan Power with a 2.5 Megawatt Array Near Marion, Indiana

07/29/15, 11:33 AM | Solar Power, Other Renewables | project development
This solar project with Inovateus marks the first for Indiana Michigan Power

07/24/15, 08:06 AM | Solar Power, Other Renewables | project development | SunEdison
TPDDL is the largest electricity distribution utility in Delhi, and provides power to over 6 million people in India's capital city. 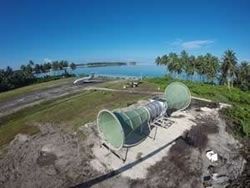 The Nature Conservancy has completed its first phase of installation of SheerWind's INVELOX funnel-based wind power technology. Because Palmyra is home to a national wildlife refuge and more than a million nesting seabirds, conventional wind turbines were not an option due to the risk of bird strikes. What's more, the low wind speeds on the island would provide little to no energy production with traditional turbines.  The Conservancy turned to the Minnesota firm SheerWind to design the system resembling an hourglass turned on its side. Extending 83 feet horizontally with a big wind scoop at one end, an exhaust on the other, a Venturi section in the middle increases wind speed potentially three to six times. Nets over the intake and enclosed blades keep it bird friendly. The first phase of the installation includes a single turbine inside the Venturi, allowing for two additional to be installed in the near future.  The first phase of the INVELOX project is successfully charging batteries at night and on cloudy days to supplement the photovoltaic system also installed on Palmyra.