GlobalData's latest renewable policy report includes major policy developments in the renewable energy market for the month August, 2010. This includes updates in policies in China and the US.

coal-fired power plants. While nuclear energy is one of the alternative options to fossil fuels, China is

shifting its focus towards its renewable power market. In 2006, the country introduced the Renewable

According to the changing market scenarios, the law was further amended to attract the investors to

226.5 GW. The US was second to China with its cumulative renewable installed capacity of

1.2 China Ranked First in the Global Clean Energy Investments in 2009

In 2009, China led investments in clean energy globally, thereby shifting the US to the second position.

With an investment of approximately $34.6 billion in clean energy in 2009, it overtook the US which

invested around $18.6 billion. The mandatory wind and solar power targets together with the easy

availability of project finance are the major drivers for investments in the Chinese clean energy market.

As the country has a strong manufacturing base and large export market, it is now focusing on increasing 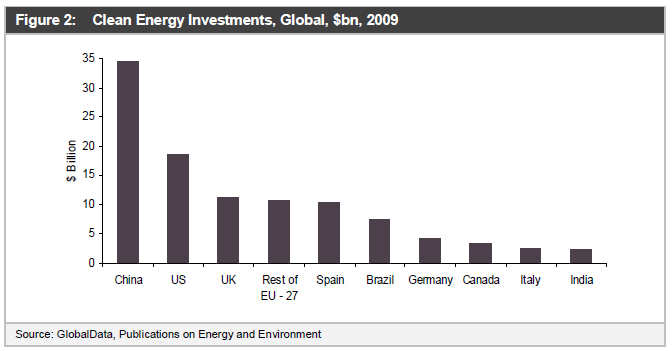 1.2.1 Asset Financing Accounts for 86% of the Clean Energy Investments in China in

Asset financing in global clean energy investments in 2009 decreased by 6% compared to 2008. China

led in global clean energy asset finance investments in 2009, with $29.8 billion of investments. Of the

2009 to support investments in manufacturing facilities.

China’s offshore wind energy market is in its nascent stage. It has a minimum of three active offshore

wind projects with a cumulative installed capacity of around 109.5 MW. The Shanghai Donghai Daqiao

approximately 3,867.9 MW. In 2009, the National Energy Administration (NEA) focused on the

into three categories, which are: inter-tidal zone, offshore zone and deep sea zone. The NEA is expected

to start a concession-tendering process to analyze a tariff range for offshore wind power players. In this

backdrop, China’s wind power capacity is expected to increase due to the exploration of its offshore wind

Thus, China’s wind energy market is expected to grow at the same pace. The development of a proper

grid infrastructure, mandatory on-grid connectivity of renewable projects, an increase in the capacity

country’s offshore wind potential are the major drivers for the growth of China’s wind power market.

1.2.3 Since 2005, the Highest Investments Have Been in the Wind Energy Sector

2005–2009 in China. Huge investments in the wind energy sector are mainly due to government

in 2009 also stimulated the growth of the wind energy sector in the country. By 2009, there were around

Goldwind and Dongfang have a combined production capacity of 8.2 GW for an annual market of 13.8

With 9% of the country’s final consumption coming from renewable energy, China is expected to achieve

its 2010 target of generating 10% of the final energy consumption through renewable energy sources. An

domestic demand for renewable power in the country. The government is concentrating on the upgrading

of the existing grid infrastructure, which is expected to increase the on-grid power through renewable

Besides China’s fiscal stimulus of around $220 billion, the government plans to invest $738 billion for the

development of its renewable energy sources. Due to its recent support policies in wind and solar

photovoltaic (PV) sectors and strong market growth in 2009, the government has proposed to increase

its wind and solar PV targets by five-fold and 11-fold respectively. Although the government is

concentrating on its clean energy market growth, it should also consider improving its quality standards

to withstand competition by international players.

2 Storage Bill 2010 – Expected Impact in the US Energy Storage

The Storage Technology of Renewable and Green Energy Bill of 2010 (Storage Bill 2010), revision to the

Ron Wyden (D-OR), and Jeanne Shaheen (D-NH) introduced the bill for approval. The following are the

various credits that can be availed through the bill.

not for companies developing batteries for electric cars. The Storage Bill 2010 would help improve the

efficiency, versatility and reliability of the US electric grid, and would offer more affordable energy storage

2.2 Energy Storage Market Developments in the US Due to Storage Bill, 2010

penetration of energy storage companies in the US renewable energy industry. The following picture 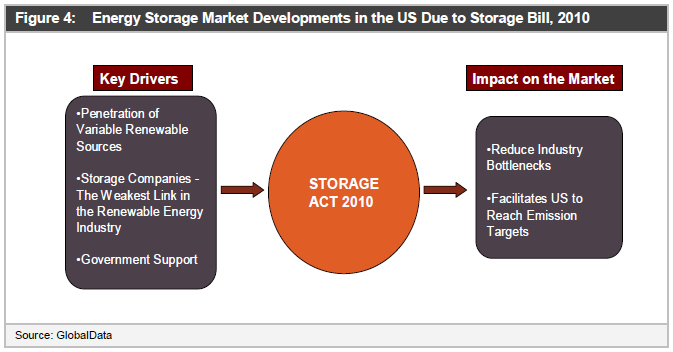 2.3 Key Drivers of the Bill

The following are the key drivers for the proposal of Energy Storage Bill, 2010:

Due to various bottlenecks, it is difficult for the storage companies to penetrate much in the US clean

energy market. High upfront costs, the array of services it provides and the challenges it has in

have been the major barriers for the development of energy storage market in the US. The challenge of

simulating energy storage in the grid, estimating its total value, and actually recovering those value

streams continues to be a major barrier.

2.4.2 Facilitates US to Reach Emission Targets

peak load requirements on days with high electricity demand periods. This will also have substantial

benefits from reduced emissions of criteria pollutants. Moreover, the bill is expected to reduce costs to

avoiding or deferring distribution and transmission system upgrades and expansion of the grid.