The endless pursuit of solar energy as a realistic alternative energy source to fossil fuel shows no signs of waning; which is not only good news for businesses and consumers, but also great news for investors as well. Never underestimate the power of technology.

The solar energy field is no longer relegated to some small obscure subterranean research facility dedicated solely to the furthering of science for its own sake, but is indeed becoming widely accepted as a legitimate, viable, and profitable alternative to more mainstream energy resources. SolarPlaza's most recent list of the top ten publicly traded solar energy companies illustrates that when it comes to competitiveness and profitability, many solar energy companies are more than capable of running with the big boys. 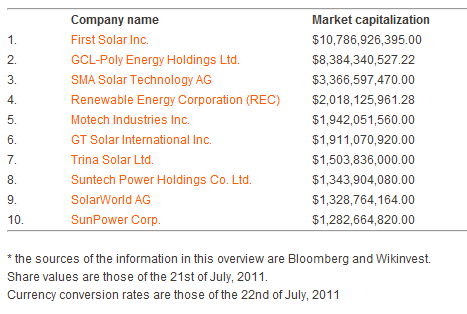 Heading the list of Top Ten stock listed companies (based on market capitalization) is First Solar Inc. The company’s record-breaking Thin-Film technology and massive module production capacity, which is expected to reach 2.3GW in 2011, has assured First Solar of a steady position as an industry leader since its foundation in 1999. This is obviously reflected in the company’s market capitalization, an impressive $10.7 billion that stands tall above the other companies in this overview.

Although the top 10 is mainly dominated by module manufacturers such as First Solar, REC, Trina Solar, Suntech and Sunpower, it is interesting to see that other parts of the supply chain are also featured amongst the solar giants. For example, on the second place we find GCL-Poly Energy, one of the world’s leading polysilicon and wafer suppliers, while the third place in the overview has been claimed by the largest producer of solar inverters, SMA solar technology.

That technology development is an integral part of solar energy’s infrastructure and growth is also demonstrated by GT Solar international, which occupies the number six space in the top ten list. GT Solar is a leading global provider of polysilicon production technology, crystalline ingot growth systems and related photovoltaic manufacturing services for the solar industry. Technological growth and innovation continues to drive the industry forward creating new opportunities for expansion. These companies and others like them continue to forge ahead leaving their mark on a growing industry. Interest in solar energy is nothing new. People have been taking about it for decades. But it hasn’t been until only recently that technology has enabled us to explore the possibilities and broaden the boundaries of what we know about solar energy.

The endless pursuit of solar energy as a realistic alternative energy source to fossil fuel shows no signs of waning; which is not only good news for businesses and consumers, but also great news for investors as well. Never underestimate the power of technology. The technologies used to collect and store solar energy are constantly evolving, allowing for increased efficiency and cost effectiveness. These top ten stock listed solar companies continue to promote growth and meet the challenge of providing sustained profitability to their investors head on.

See the full top-10 and the link to the complete top-30 here: www.solarplaza.com/top10-stock-listed-companies-market-capitalization/

Solarplaza is the independent global platform for knowledge, trade missions and events related to solar energy. Solarplaza is located in Rotterdam and has already organized over twenty-five international conferences and trade missions in Greece, California, France, Taiwan, China, India, Italy, Germany and Spain, to name but a few.