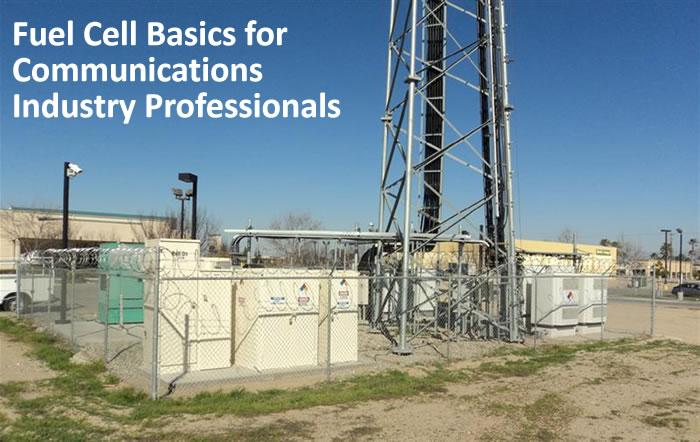 Fuel cells are used today in a variety of applications ranging from backup power for telecommunications and government industries to material handling vehicles and recreational vehicle support systems.  They are considered a clean, green alternative to batteries and combustion engines, capable of passing the most stringent air quality standards.  They are famous for their role in the Space program since the late 1950s as a source of both power and water for crew consumption.  But what are fuel cells, how do they work, who uses them and why should you care?

A fuel cell is a device that converts the chemical energy of a fuel (hydrogen, natural gas, methane, alcohol, gasoline, etc.) and an oxidant (air or oxygen) directly into electricity.  This process happens without combustion.  A fuel cell operates electrochemically through the use of an electrolyte, just like a battery, but it does not run down or require recharging.  It is like a generator in that it operates as long as the fuel is supplied; but unlike a generator, it is simple, quiet, clean and has few moving parts. 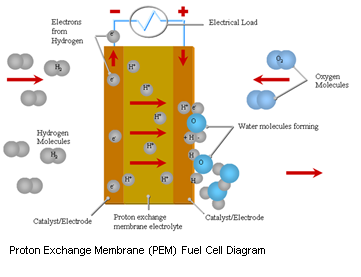 There are several types of fuel cells, each using a different type of chemistry.  Some types of fuel cells work well for use in stationary power generation plants.  Others are useful for small portable applications or for powering cars.

While there are a number of fuel cell technologies available, the most common and practical technology for small to medium sized standby power is the proton exchange membrane, or PEM, fuel cell.  The only inputs to the PEM fuel cell are industrial grade hydrogen as fuel and ambient air as a source of oxygen.  The only by-products are DC electricity, pure water/vapor and a small amount of heat.

Applications for fuel cells
Where are they currently being used?

Today, fuel cells are used primarily in stationary power and material handling applications.  Telecommunications, government communications, security, transportation communications and others use fuel cells for backup power in grid-powered locations.  Fuel cells are also used in remote and off-grid applications as one component to a hybrid power solution which can involve any of the following other power sources: solar arrays, wind turbines, batteries, and/or generators.

Fuel cells are used by a number of businesses including hotels and hospitals as larger continuous power, sometimes also using the heat from the fuel cell to heat facility water (co-generation).  Fuel cells are growing as a source of power for lift vehicles used in material handling in large warehouse facilities.  They are also used as power devices for on-board equipment in the recreational vehicle industry, primarily in Europe at this point.

There are currently more than 1,600 telecommunication sites using fuel cell power solutions in North America alone.  While this represents a small percentage as far as total telecom sites, it is clear that fuel cells are a growing solution to the need for reliable energy for sites in locations as diverse as cities, suburbs, rural, off-grid and environmentally sensitive areas. 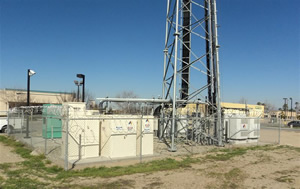 As part of a fuel cell market transformation project co-funded by the U.S. Department of Energy (DOE), ReliOn recently installed 431 fuel cell systems at 180 cell tower locations belonging to AT&T across ten states.  The goal was to install the fuel cells as critical emergency reserve power with at least 72-hours of run capacity between refuelings in order to demonstrate that fuel cells are a reliable source of clean backup power for key communications facilities.

ReliOn’s approach to this turnkey deployment program began with identifying viable candidate sites that could be installed and refueled successfully, ensuring that these assets will remain viable for decades.  Physical site surveys were performed and then rights to perform construction were secured through the site acquisition process.  ReliOn utilized third parties to perform installation construction, while retaining the roles of project management and supervision.  ReliOn partnered with an established hydrogen fuel provider, Air Products, for the development and production of the innovative, stationary bulk hydrogen storage module (HSM) used for this program.  The HSM is designed for a bulk refueling module similar to that used by diesel generators and is now available for a high percentage of U.S. locations.

Once the sites were installed, fueled and operational, a sample population was monitored remotely for one year for data collection and reporting purposes.  The DOE then compiled the data from the entire program and determined that the fuel cells in the program exhibited 99.9% reliability.  Specific data from ReliOn sites indicated that the fuel cells provided backup power during grid outages ranging between twenty minutes and seventy-three continuous hours. 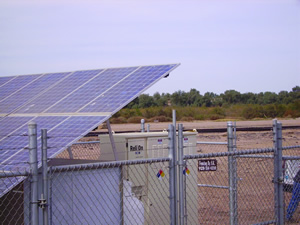 In the deserts of Arizona, a number of off-grid communication and surveillance sites are being powered by a hybrid consisting of solar panels and batteries, with fuel cells providing backup power.  The fuel cells operate if a period of extended darkness limits the photovoltaic output, or if there is a problem with the solar array in general.  The fuel cell systems are supplied with additional fuel storage, increasing the length of time the system is able to operate between site visits.

The goal of the configuration was to maximize the power of the sun in providing energy to the site, while maintaining the battery string at a healthy level of operation so that it had the ability to cover much of the time not powered by the solar array.  At issue was the reliability of generators, which would occasionally fail to start or would cease to operate shortly after startup, leading to costly, manpower-intensive maintenance at times outside normal work hours.  The introduction of the fuel cell solution as a replacement for generators at these sites dropped the maintenance costs significantly, lowered fuel consumption and eliminated false alarms caused by vibration of the generators, while increasing the reliability of the sites.

Sensitivity to noise is dependent on the location of the site needing backup power.  Sites located in neighborhoods or locations where people congregate will have a lower threshold than remote sites.  Diesel generators and fuel cells both have ranges of noise, depending on the product selected and its configuration.  A survey of diesel generator and fuel cell specs shows that the average fuel cell is about 10 decibels lower than the average generator.

Fuel toxicity has the potential to add costly cleanup in case of fuel spills.  Diesel fuel, being heavier than air, spills directly onto the ground and can lead to significant contamination of the soil if not dealt with promptly.  Soil must be excavated and surrounding areas tested for acceptable levels of contaminants.  More extensive measures must be taken if contamination reaches ground water and public water supplies.

Hydrogen does not have these issues.  Hydrogen is non-toxic and because it is lighter than air, it disperses quickly if leaked.

Diesel generators are notorious for their pollutants.  States such as California have set limits to the number of hours a generator can be run in non-emergency situations in order to address the emissions issue.[1]  Federal guidelines limit the amount of emissions allowed by generators[2].  A 50kW diesel generator being used as backup power, for example, falls under Tier 2 standards and is allowed 5 grams of carbon monoxide per kilowatt-hour, 7.5 grams of NOx per kilowatt-hour and 0.4 grams of particulate matter per kilowatt-hour.  When one extrapolates to 1,000 generators providing 150 hours of runtime per year each for 5 years, the environmental impact becomes very clear. 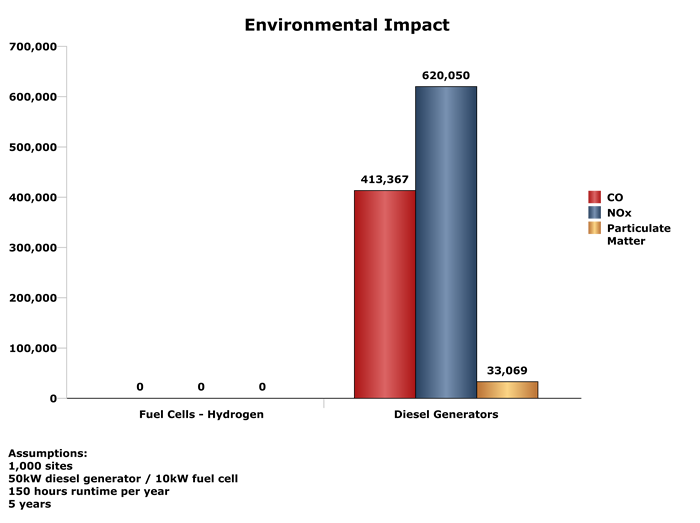 Comparatively, fuel cells running on hydrogen emit no pollutants.  This makes them an ideal solution for locations where air quality is an issue.  Hydrogen fuel cell emissions are comprised entirely of a small amount of heat and a little water.

When comparing the carbon dioxide emissions of diesel generators and hydrogen fuel cells, the further disparity between the solutions is evident.  While the diesel generator emits 1,500 grams of CO2 per kilowatt hour, the fuel cell running on hydrogen has no emissions at the point of use.

As part of many State and Federal government efforts to move toward environmental responsibility, programs have been put into place to incent corporations to install fuel cell solutions.  A Federal tax credit program in effect until December 2016 allows credits of $3,000 per kilowatt or 30% of the system cost, whichever is less, and entitles the taxpayer to subtract the amount of the credit (dollar-for-dollar) from its total federal tax liability.

Eligibility has been extended to all utilities and telecommunication entities.

Additionally, many states have adopted incentives.  These programs are in addition to Federal credits and the savings are additive.  Policies continue to be added and changed.  Good sources for current tax incentive information are available through the Database of State Incentives for Renewable Energy website, www.dsireusa.org/ and FuelCells.org www.fuelcells.org/dbs/index.php.

Telecommunications operators are charged with keeping equipment functioning so that critical communication and daily communication functions no matter what.  Without power, “anytime, anywhere” becomes “can’t communicate anywhere”.  There are many options when providing energy to a site and issues such as location, environmental sensitivity and the ability to provide grid power make having one solution impossible.  Fuel cells are a viable, commercial product addressing needs to a number of site issues.  Using them to address your network needs increases reliability, decreases maintenance costs and promotes a healthy environment.