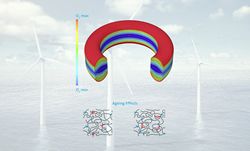 Freudenberg Sealing Technologies has now developed a method that takes material changes at the molecular level into account when predicting the long-term durability of seals.

In this article, we'll discuss the average commercial building energy consumption per square foot, and tell how to measure and compare your own usage with other buildings in your industry. Let's get started.

What Is The Average Utility Cost Per Square Foot Of Commercial Property?

For most commercial buildings, energy is the single largest operating expense, most of which comes in the form of electricity. That being the case, the cost of utility-supplied power is of major concern to property managers searching for ways to lower costs. Companies realize it wont be practical to rely on old forms of energy forever. The sooner they can test and implement new, greener solutions in their data centers, the quicker they can view the future confidently.

The Business Case for Fuel Cells 2014: Powering the Bottom Line for Business and Communities 07/14/14, 09:58 AM | Solar & Wind | Commercial and Industrial Applications
The three products we offer are the PowerChip, a silicon based fuel cell product targeted for defense and commercial customers, the second product is the BuzzBar Suite that is targeted at consumers for cell phone and tablet charging, and the final product is the Formira product, which is an air based fuel cell technology that generates hydrogen for formic acid and that can be used for larger power ranges. The Business Case for Fuel Cells - Power Reliability and Savings More than 88 megawatts (MW) of stationary fuel cells have been installed or ordered by U.S. businesses and utilities.

08/30/13, 08:24 AM | Solar & Wind | Commercial and Industrial Applications
The Solid-Oxide Fuel Cell Tactical Electrical Power Unit is aimed at reducing the need to transport fuel around the battlefield, especially in dangerous theaters like Afghanistan, where enemies routinely target supply routes with homemade bombs. The Word is "More" for Fuel Cell Buses So far 2013 has been an exciting year for fuel cell buses, with a host of news reports from the U.S. and abroad. 01/03/13, 08:28 AM | Solar & Wind | Commercial and Industrial Applications
Fuel cells have an unmatched combination of benefits, leading the companies profiled to collectively save millions of dollars in electricity, labor and fuel costs while reducing carbon dioxide emissions by hundreds of thousands of metric tons per year. The fuel cell industry offers tremendous opportunity for manufacturing, engineering, and business development jobs, and once the supply chain, integrators, and service providers are factored in, could help the U.S. rebound and thrive in a competitive marketplace.