Solar market growth slowed in 2012, after setting a record pace in 2011. While the market stabilized solar is still becoming a larger source of power generation, expected to surpass 100 GW of cumulative installed capacity globally this year.

In addition, there were 17 transactions for solar energy  producers, or 52% of the total, which is about half as  many as the 32 recorded in Q4 2012. This quarter  there were eight acquisitions of cells / modules  producers, or 24% of the total transaction volume.  There were six transactions for companies categorized  as EPC integrators / developers, or 18% of total  activity, while companies categorized as providers of  equipment for solar accounted for two transactions, or  6% of the Q1 2013 total. No transactions categorized  as wafer / ingot producers or vertically integrated  companies were recorded during the quarter.  After a spike in Q4 2012, acquisition activity returned  to normal levels in Q1 2013. Consolidation for  producers of solar power continued to be the primary  source of deal activity, in addition to significant volume  from the private equity / investors category. Activity  remained significantly weighted to the more  established markets in Europe and North America,  with nearly 65% of all transactions in Q1, as  conditions are ripe for industry consolidation and  deployment of capital for solar development.

Solar market growth slowed in 2012, after  setting a record pace in 2011. While the  market stabilized solar is still becoming a  larger source of power generation,  expected to surpass 100 GW of cumulative  installed capacity globally this year.  In 2013, the expected growth of markets  outside of Europe is unlikely to fully  compensate for the slowdown in the  mature European market. Moving forward,  growth in demand is expected to be driven  by price decreases for solar systems and  the development of untapped markets as  the industry is no longer relying on some of  the historically strong geographies. This  trend is demonstrated in Chart F, where  after a slight decline in 2013, the solar  industry is expected to return to moderate  expansion from 2014 to 2017.  Europe has traditionally dominated the  solar market, but the rest of the world has  been catching up at a rapid pace. In fact,  Europe’s share of the market shrunk from  74% in 2011 to 55% in 2012. It is expected  that the market will continue to diversify in  2013, with Europe’s share falling below  50%. Outside of Europe, the market is wellbalanced. China, the United States and  Japan are leaders with great potential for  future growth. In 2012, China became the  third largest solar market globally ahead of  the U.S. and Japan, as illustrated in Chart  G. These three geographies are followed  by a secondary market of relatively  untapped developing countries who could  shape the face of PV in the future.  Currently, the split between rooftop and  utility-scale solar installations is weighted  toward the rooftop segment, as shown in  Chart H. However, this segmentation is  expected to shift in the future as utilityscale plants are forecasted to see much  faster growth globally. However, in certain  markets, such as the U.S., rooftop projects  are expected to experience faster growth  with the expansion of solar leasing  programs.  Overall the prospects for solar are  expected to be positive globally as the  market matures. 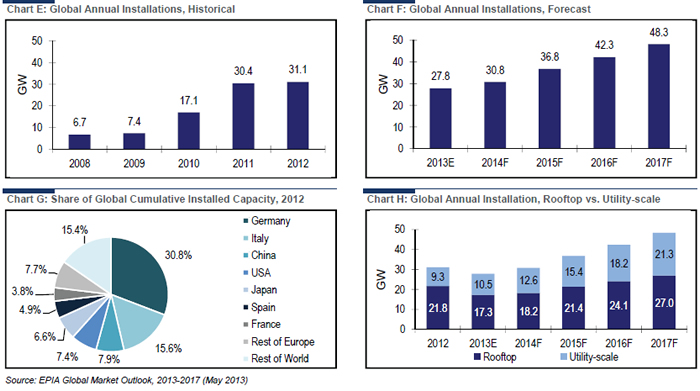