Solar City, a company started by two brothers in 2006, has now become America's largest solar services provider. It plans to expand its business by acquiring the solar panel manufacturer Silveo.

SolarCity: How the Silveo Acquisition Fits In to the Big Picture

The American energy services provider SolarCity acquired solar panel manufacturer Silveo in June 2014. SolarCity has mostly been engaged in the business of leasing solar panels. This acquisition of Silveo is SolarCity's attempt to enter the manufacturing business in the US. Under the terms of the agreement, the company will purchase Silveo for up to $350 million in stock, although $150 million of this sale price will be paid only after certain production milestones are achieved.

With this acquisition, the company is planning to reduce its solar module production dependency on China and wants to join the ranks of SunPower, SunEdison and First Solar, which are already vertically integrated.

Why this is a good move for SolarCity

SolarCity has already been struggling with the increase in prices of Chinese solar panels, which could make – over time – leasing the less attractive option. According to the GTM Research, prices for solar PV modules delivered to the US by Chinese suppliers could increase by as much as 20% by the end of 2014. This increase has been caused by supply constraints, rising input costs, and the ongoing US-China solar trade dispute. Further, in May 2014, the Department of commerce announced plans to raise tariffs on imports of solar panels from China.

With the acquisition of Silveo, the company plans to build a solar panel factory in New York in the coming years which will bring its module prices down by reducing its complete dependency on Chinese imports.

Strong growth of the US Residential Solar PV Industry:

The cumulative installed capacity of residential solar PV in the US grew from 220 MW in 2011 to 800 MW in 2013, at a Compound Annual Growth Rate (CAGR) of 91%. The residential solar PV market, thus, continued to see the most rapid growth of any segment in the US. Further, the market is expected to grow at a CAGR of 46% during the period 2014-2016, thereby reaching 2,100 MW of installed capacity by 2016. Residential Third-party Ownership (RTPO) and the decreasing cost of solar PV modules played a major role in the process of mass adoption of solar power in the residential space.

SolarCity has already captured emerging US residential solar PV market with its strategic moves. The company is one of the pioneers of the RTPO program. Further, the company has been steadily moving upstream, by acquiring the racking company Zep Solar for $158 million in 2013. All these moves resulted in the market leadership of SolarCity in the residential solar PV industry, with a market share of 32% in Q3-2013, as compared to 26% in Q2-2013 and 20% in Q1-2013.

In addition, the company has been heavily focused on cutting overall PV system costs. The acquisition of a manufacturing unit (Silveo) will help the company to offer low-cost green energy to the markets. It will help evade the adverse impact of higher tariffs levied on Chinese-made modules in the US. Moreover, Silveo’s highly automated plant would keep labor costs low.

Silveo claims that its tunneling junction device uses elements of standard crystalline silicon solar cells and elements of thin-film solar cells. The company’s Triex tunneling junction technology is said to lower manufacturing costs of solar panels by simplifying the process. The technology boasts of high efficiency of as much as 21%, while the standard cell efficiency is around 17–18%. Higher efficiency will further reduce costs by reducing the number of panels needed to be installed, hence reducing the cost of installation and mounting hardware. 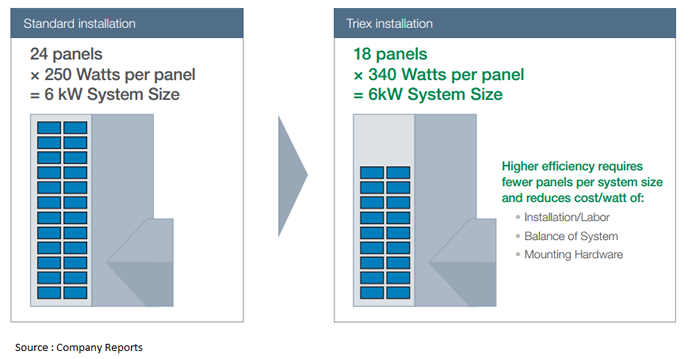 The company continues to increase its client base and retain value. As of the end of Q1-2014, SolarCity estimated that its number of energy contracts had increased to 17,344 as compared to 10,759 in Q4- 2013 and 10,442 in Q1-2013. This sharp growth in the number of contracts and future cash flow was accompanied by a higher outlook for 2014 and 2015, when the company expects to increase its guidance to deploy 525 MW in 2014 and 950MW in 2015. The company is planning to achieve its increasing targets and meet future demands by increasing its production capacity, in which the Silveo acquisition will play an important role. 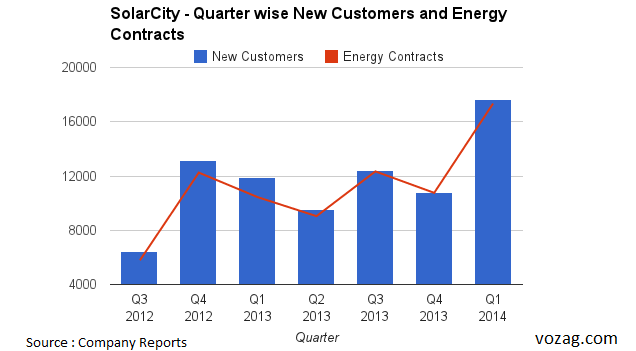 The acquisition will mainly enable the company to meet its future strategic goals of bringing down its operating costs, reducing its dependency on Chinese imports, cost-competitiveness and building its production capacity to 1GW in New York. However, the acquisition might also open the door to additional risks related to production, which may, over time, negatively affect SolarCity's cash flows.

Posted by Nathan Winfield on 10/29/14, 11:42 AM
I appreciate the tips. I have always wanted a solar panel, it would save me a lot of money. I agree that you need to be extra careful when installing the panel and if you hired a company to install it for you then have them double check that its in properly so it will not break down the road due to poor installation. I will be getting one when I find a nice house to settle in. http://cochisetech.net/solar/default.php
Posted by Luis Ferreira on 07/28/13, 11:19 AM
Regarding the featured dual axis PV system, the pole is 8"X8"X18' long and the square tube wall thickness is 1/4". there is an other square tube mounted horizontally on top of the pole and it covers the full lenght of the array, what is the size of this square tube, it appears to be 6"X6" but what is the thickness of this tube, als,o there are eight rails where the pv panels are bolted to, what type of material and size arew these rails. Thank you in advance for your reply. Regards, Luis
Posted by Aleta Graham on 01/21/10, 08:29 AM
I have seen the pole mounted solar panels across all major highways. It is a great alternative for people who have small roofs but large lots. I appreciate the advances in technology with the advent of flexible solar panels made from thin film technology. It is amazing that you could power your cell phone and Ipod from a solar backpack.