All of the top 10 states—with the exception of Florida—have a renewable portfolio standard in place. Most of those policies include a specific target for solar power or customer-sited generation.

Several large plants were phased into operation in California during 2014, including two 550 MW solar photovoltaic plants, Topaz and Desert Sunlight (Phases 1 and 2), as well as the 377 MW Ivanpah (Phases 1, 2, and 3) and the 250 MW Genesis solar thermal plants. In total, nearly 1,900 MW of new utility-scale solar capacity was added, bringing the state's utility-scale capacity for all solar technologies to 5,400 MW by the end of 2014.

California has promoted solar power through a series of state policies, including a renewable portfolio standard(RPS) that requires electricity providers to obtain 33% of the power they sell from eligible renewable sources by 2020. In 2014, the state obtained 22% of its electricity from nonhydropower renewables including wind, solar, and biomass.

The top three states in utility-scale solar generation in 2014 were California, Arizona, and Nevada. These states in the southwestern United States have some of the best solar resources in the world. However, states with less-favorable solar resources, such as New Jersey and Massachusetts, also are among the top 10 states in total solar generation. All of the top 10 states—with the exception of Florida—have a renewable portfolio standard in place. Most of those policies include a specific target for solar power or customer-sited generation. 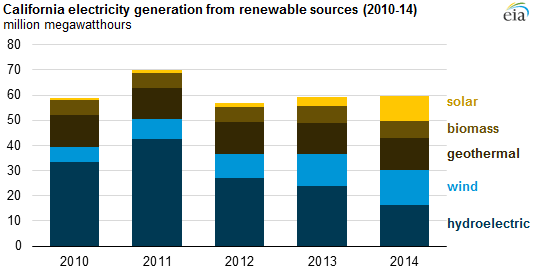