About 60 miles west of Las Vegas is pretty near the heart of the Mojave Desert. It is also the site for a 17.5 MW solar electric power plant. Solar energy today is an abundant and sustainable energy that dramatically reduces the amount of greenhouse gases being emitted into the environment while producing electricity. It is also a renewable energy industry that employs over 200,000* people in the US. This solar plant was planned for an 80-acre site in the northern area of Pahrump, Nevada and would generate enough electricity to power approximately 3,500 homes per year. This is a story about a solar power plant that almost didn’t happen.

In the initial phases of the project the Bombard team discovered an endangered species, Gopherus agassizii, or the Desert Tortoise on the site. The finding put the solar project in question and opened more questions about how a solar project can be modified to better accommodate local environments. An important conversation about balance in regional nature and efficient harvesting of sustainable energy is in progress.

The Mojave Desert Tortoises have lived in the area for millions of years and encountering them was not an uncommon occurrence until the mid-1900s. Today they are rarely seen and in some areas have disappeared entirely. One of the most elusive inhabitants of the desert, the tortoises spend almost 95% of their life underground in burrows. They range in size from 2 up to 15 inches. Nevada’s official state reptile, they can live up to 50 years in the wild. Their diet consists of wildflowers, grasses and cacti. The tortoises depend on bushes and vegetation for shade and protection from predators like ravens and coyotes. They live in burrows to escape the extreme summer heat and cold winters. When they are young they seldom venture more than 150 feet from their burrows. As they get older they may go as far as three quarters of a mile in a day and use a network of burrows. In the most densely populated tortoise areas, you could find one tortoise per 2.5 acres, but it’s more likely you will find one tortoise per 100 acres.

The solar project team reached out to the US Fish and wildlife Service to discuss the endangered tortoises and explore their options. There were unique challenges to overcome in order to continue with the project. The budgetary impact would need to be assessed as both sides explored options. With open communication and education, the solar team set out to find resolutions and make the necessary modifications.

The Valley Electric Association funded and facilitated ongoing research and monitoring studies in partnership with government agencies and regional researchers to evaluate the impact of the solar array on local vegetation, the tortoise population and the birds. A number of unique adaptations were incorporated into the solar project plan.

It was important to keep the ground surface intact and not destroy the indigenous vegetation. Typically, the ground surface of a solar site would be graded and leveled. In this case, the project plan called for an adjustable solar racking solution that could be installed on uneven, sloped terrain. Bombard Renewable Energy selected Solar FlexRack’s G3-X fixed tilt racking system. The intelligent design of the system allows horizontal rails to be set in place with no hardware during initial placement. The rack can easily be adjusted in the field to accommodate increased ground clearance and slope, a smart and cost-effective solution backed by one of the best services and support teams in the industry.

To reduce impact on the project site, the ground was mowed so the root system would stay intact and existing vegetation would regenerate. The project was redesigned with greater spacing of rows on the southern half of the array for ongoing research and studies of environmental impact of the solar system on the vegetation and animals. The leading edge of the modules, which generally sets around 18-24” above the ground, was raised to an average of 42” to facilitate regeneration of vegetation and create easier entry for small animals (birds and other wildlife in addition to the desert tortoises). The perimeter safety fencing was planned with one foot openings at consistent intervals around the periphery for tortoises’ access. Trenching was moved into the access roads to minimize ground disturbance.

Initial suggestions and discussions of the project posed challenges that represented delays of magnitude and significantly impacted project costs and feasibility. The solar project team worked closely with the US Fish and Wildlife and presented new solar project plans for their review. The innovations in the plan met requirements and eliminated a year’s worth of prep work. The US Fish and Wildlife Service green-lighted the Pahrump Solar Project for construction.

In March of 2016 work began on the Pahrump Solar Plant. The construction company utilized local union workers and installed American-made components. Tax revenues from the site will go to county officials and the affordable solar energy will power residences and businesses in southwestern Nevada.

The solar plant is constructed with 51,562 SolarWorld Sunmodule XL 340W monocrystalline modules. These modules perform exceptionally well in the extreme heat of the desert compared to other conventional solar modules due to their lower temperature coefficient. Couple that with their high wattage and this powerful performance choice reduces payback time and ultimately the overall costs of the Pahrump plant. The modules come with an industry-standard warranty of 25 years from a reliable company. That’s important to note considering that solar modules represent approximately 20% of the entire system’s costs.

Valley Electric Association has a fixed-rate power purchase agreement (PPA) with Nevada Valley Solar Solutions I, LLC who operate the plant. VEA secured one of the lowest-priced solar energy contracts in the US allowing the cooperative to offer lower priced electricity to its members through its new community solar program.

The Pahrump Solar Project’s construction is completed and the system is currently generating clean solar electricity. It is expected to deliver over 32,680,000 kWh of energy per year.

Research is continuing on the desert tortoise. Pahrump has been a milestone solar project from inception, demonstrating how a members-based electric cooperative can take a progressive step toward providing sustainable energy to their communities and at the same time explore new methods of lowering electricity costs. This project is an example of leadership. It is a lesson in working together to solve challenging issues and find balance in our quest to both generate sustainable energy and protect the precious ecosystem of our planet. 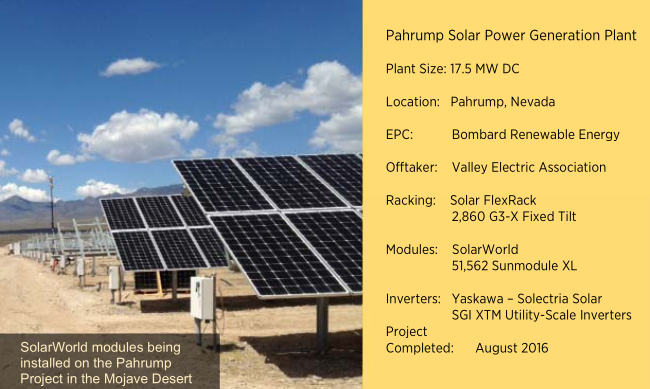 The Series G3-X Ground Rack is easily staged on the jobsite and can be assembled in the field by crews of any skill level. It’s been third party verified for speed of installation by Industrial Time Study Institute, Inc.

The unique design of the series G3-X makes it a perfect fit for nearly any installation. A flexible and adaptable model on the jobsite, G3-X can accommodate up to 20% slope in the E/W direction

The series G3-X is value engineered by our world-class team to optimize materials, limit components and create a cost effective solution. Lateral bracing is used to stabilize and square the racks creating both a durable system and one that actually accelerates the module installation process by preventing spacing issues during installation. The horizontal rail bracket allows the horizontal rails to be set in place with no hardware during initial placement and be easily adjusted in the field. Learn more about Solar FlexRack at www.solarflexrack.com

SolarWorld REAL VALUE: SolarWorld manufactures and sells high-tech solar power solutions and in doing so contributes to a cleaner energy supply worldwide. From raw material silicon to solar wafers, cells and modules, SolarWorld manages all stages of production ‒ including research and development in its own company, SolarWorld Innovations. The company upholds high social standards and commits itself to resource- and energy-efficient production. SolarWorld was founded in 1998 and has been publicly traded on the stock market since 1999. Connect with SolarWorld on Facebook, Twitter and www.solarworld.com.

Posted by Mona Crue on 10/07/16, 04:03 AM
So if we want to use our intelligence - how about copying nature ? Rather than erecting towers of reflective surfaces that damage other stuff (Gehry's LA museum melting car dashboards?) - let's just put solar surfacing on glass to use them to generate power - and/or where it's too hot, just use solar panels as shade - so where you want shade you're also getting free power. Here are more details http://solarpanelsuit.com/