Sewage-to-energy would cut costs, and reduce greenhouse gas emissions. Industry calculations show that if all biosolids in the United States were converted into biomass energy, they would yield 7 million to 7.6 million megawatts of energy, while the existing capacity of wind power in the United States is approximately 43,000 megawatts.

Can Sewage Solve Our Energy Crisis?

The Edmonton Composting Facility, in Edmonton, Canada, is the largest sewage sludge composting site in North America. In New York City, several sewage treatment plants have dewatering facilities that use large centrifuges along with the addition of chemicals such as polymer to further remove liquid from the sludge. In the very large metropolitan areas of southern California inland communities return sewage sludge to the sewer system of communities at lower elevations to be reprocessed at a few very large treatment plants on the Pacific coast. This reduces the required size of interceptor sewers and allows local recycling of treated wastewater while retaining the economy of a single sludge processing facility. These are just a few examples of sewage solving our energy crisis.

With the growing trends of energy consumption, existing production is unsustainable. If the world maintains existing policies in energy usage and production, global energy demand will rise by 1.5 % per year on average through 2030, while fossil fuels remain the main energy source, accounting for more than 75% of the overall increase in energy consumption.

How to sustain the supply of reliable and affordable energy for future generations is a challenge that needs to be addressed now. We need to focus on the energy-related issues, and employ a sustainable development of alternative energy. One course of action is the waste-to-energy approach. It has been widely demonstrated that organic wastes—waste biomass, sewage sludge, animal manure—hold a significant potential for energy generation. 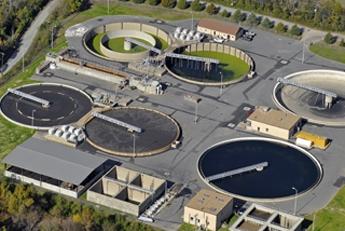 Sewage sludge treatment is the processes used to manage and dispose of sewage sludge produced during sewage treatment. Sludge is mostly water with lesser amounts of solid material removed from liquid sewage. Primary sludge is a result of the capture of suspended solids and organics in the initial treatment process through gravitational sedimentation, typically by a clarifier. The secondary treatment process uses microorganisms to consume the organic matter in the wastewater. 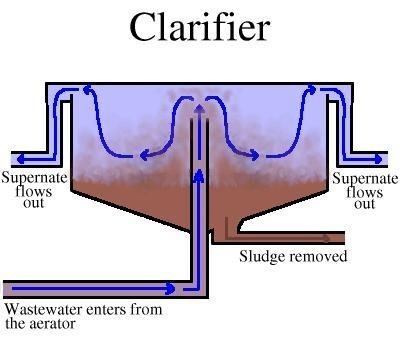 Wastewater treatment plants use anaerobic digestion to generate heat and electricity on site. Anaerobic digestion is a natural process in which micro-organisms break down the organic matter found in wet biomass waste, such as sewage sludge, animal manure,  slurry and waste food in the absence of oxygen, to produce biogas (60% methane and 40% carbon dioxide) and a nitrogen rich fertilizer. The methane gas produced from this process is then used to generate heat and electricity. 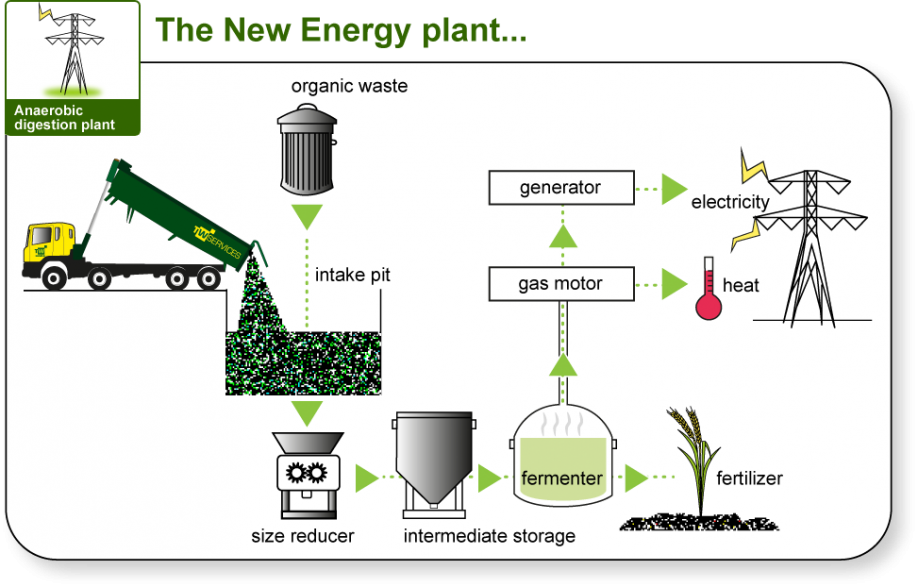 There are other ways to generate energy from wastewater, such as using energy-rich waste from sources like food processing and restaurant grease to generate heat and electricity. A system designed by CDMSmith turns restaurant wastewater into a clean, renewable source of energy at a water resource recovery facility. The grease waste from local restaurants is hauled to the treatment plant by tanker truck, run through a Honey Monster screening system to remove trash and debris and then slowly pumped into the facility’s massive sludge digesters. This “co-digestion” of human waste and grease waste greatly boosts the amount of biogas produced which can then be captured, burned to run generators and converted into clean, green energy. 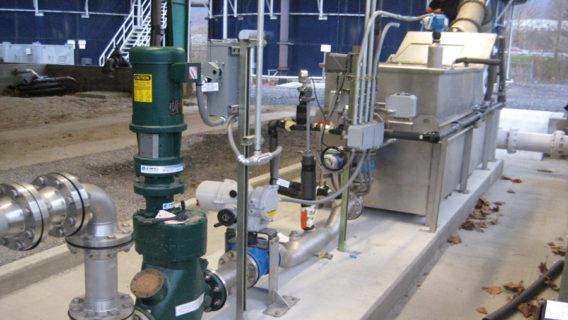 Other research is being conducted on using wastewater, which is full of nutrients, to grow algae. This algae could then be turned into biofuel that could replace gas or gasoline. Using algae for wastewater treatment offers some interesting advantages over conventional wastewater treatment. The advantages of algae-based treatment include cost effective treatment, low energy requirement, reduction in sludge formation and the production of algal biomass. 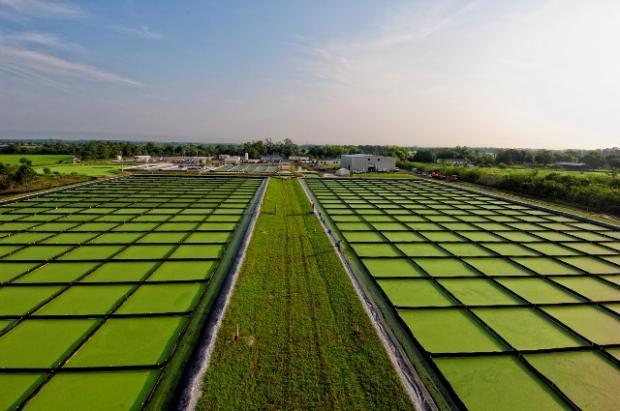 Algae play a major role in aerobic treatment of waste in the secondary treatment process. Algae can accumulate heavy metals and remove toxic compounds from the wastewater. In some cases, algae also play a role in the removal of pathogens in the tertiary treatment stage. Commercial technologies and processes for algae based wastewater treatment systems are already available in the market such as the Advanced Integrated Wastewater Pond Systems.

Advanced Integrated Wastewater Pond Systems do not require sludge management. It takes decades for the removal and disposal of sludge residues. Carbon is transformed in Advanced Integrated Wastewater Pond Systems through two important mechanisms—methane fermentation and biological assimilation by microalgae. The conversion of waste organic solids to methane, nitrogen gas and carbon dioxide via methane fermentation and the assimilation of organic and inorganic carbon to algal biomass via photosynthesis provide the basis for primary, secondary, and tertiary treatment. Advanced Integrated Wastewater Pond Systems require much less capital, energy, operation and maintenance than mechanical systems and require less land, produce less odor, and fill in or age much more slowly than ordinary ponds. 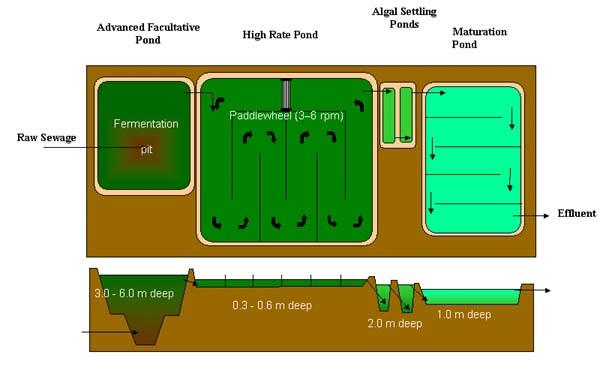 Combined heat and power (CHP), also known as cogeneration, is an efficient, clean, and reliable approach to generating power and thermal energy from a single fuel source. Wastewater treatment facilities that have anaerobic digesters create methane gas as a by-product of digestion of biosolids. Some of these facilities release methane gas by flaring—converting methane to CO2 and releasing it into the environment. Methane gas is a good source of energy. By installing a CHP system designed to meet the thermal and electrical base loads of a facility, CHP can greatly increase the facility's operational efficiency and decrease energy costs. At the same time, CHP reduces the emission of greenhouse gases, which contribute to global climate change.

There are wastewater treatment facilities that have invested in cogeneration where excess methane can be captured and taken by local power companies. Using the gas directly instead of converting it to electricity is an efficient use because energy is lost every time it is conveyed over long distances.

The U.S. Geological Survey claims that wastewater treatment plants generate about 7 million dry tons of biosolids a year. The traditional methods of dealing with this waste are costly and energy-intensive. Landfills are filling up, and sludge that's turned into fertilizer may still contain chemicals that are potentially harmful to humans and the environment.

Sewage is a resource rather than waste. Sewage-to-energy would cut costs, and reduce greenhouse gas emissions. Industry calculations show that if all biosolids in the United States were converted into biomass energy, they would yield 7 million to 7.6 million megawatts of energy, while the existing capacity of wind power in the United States is approximately 43,000 megawatts.