World clean energy investment totalled $333.5 billion last year, up 3% from 2016 and the second highest annual figure ever, taking cumulative investment since 2010 to $2.5 trillion

An extraordinary boom in photovoltaic installations made 2017 a record year for China’s investment in clean energy. This over-shadowed changes elsewhere, including jumps in investment in Australia and Mexico, and declines in Japan, the U.K. and Germany.

Annual figures from Bloomberg New Energy Finance (BNEF), based on its world-leading database of projects and deals, show that global investment in renewable energy and energy-smart technologies reached $333.5 billion last year, up 3% from a revised $324.6 billion in 2016, and only 7% short of the record figure of $360.3 billion, reached in 2015.

Jon Moore, chief executive of BNEF, commented: “The 2017 total is all the more remarkable when you consider that capital costs for the leading technology – solar – continue to fall sharply. Typical utility-scale PV systems were about 25% cheaper per megawatt last year than they were two years earlier.”

Justin Wu, head of Asia-Pacific for BNEF, said: “China installed about 20GW more solar capacity in 2017 than we forecast. This happened for two main reasons: first, despite a growing subsidy burden and worsening power curtailment, China's regulators, under pressure from the industry, were slow to curb build of utility-scale projects outside allocated government quotas. Developers of these projects are assuming they will be allocated subsidy in future years.

“Second, the cost of solar continues to fall in China, and more projects are being deployed on rooftops, in industrial parks or at other distributed locales. These systems are not limited by the government quota. Large energy consumers in China are now installing solar panels to meet their own demand, with a minimal premium subsidy.”

Overall, Chinese investment in all the clean energy technologies was $132.6 billion, up 24% setting a new record. The next biggest investing country was the U.S., at $56.9 billion, up 1% on 2016 despite the less friendly tone towards renewables adopted by the Trump administration.

Below are the 2017 totals for other countries investing $1 billion-plus in clean energy:

Solar led the way, as mentioned above, attracting $160.8 billion – equivalent to 48% of the global total for all of clean energy investment. The two biggest solar projects of all to get the go-ahead last year were both in the United Arab Emirates: the 1.2GW Marubeni JinkoSolar and Adwea Sweihan plant, at $899 million, and the 800MW Sheikh Mohammed Bin Rashid Al Maktoum III installation, at an estimated $968 million.

Wind was the second-biggest sector for investment in 2017, at $107.2 billion. This was down 12% on 2016 levels, but there were record-breaking projects financed both onshore and offshore. Onshore, American Electric Power said it would back the 2GW Oklahoma Wind Catcher project in the U.S., at $2.9 billion excluding transmission. Offshore, Ørsted said it had reached ‘final investment decision’ on the 1.4GW Hornsea 2 project in the U.K. North Sea, at an estimated $4.8 billion. There were also 13 Chinese offshore wind projects financed last year, with total capacity of 3.7GW, and estimated investment of $10.8 billion.

The third-biggest sector was energy-smart technologies, where asset finance of smart meters and battery storage, and equity-raising by specialist companies in smart grid, efficiency, storage and electric vehicles, reached $48.8 billion in 2017, up 7% on the previous year and the highest ever.

The clean energy investment total excludes hydro-electric projects of more than 50MW. However, for comparison, final investment decisions in large hydro are likely to have been worth $40-50 billion in 2017.

Breaking the investment total down by type of deal, the dominant category – as always – was asset finance of utility-scale renewable energy projects of more than 1MW. This was $216.1 billion in 2017, up fractionally on the previous year. Small-scale projects of less than 1MW (effectively small solar systems) attracted $49.4 billion, up 15% – thanks in large part to the installation rush in China.

Equity-raising by specialist clean energy companies on public markets totaled $8.7 billion in 2017, down 26%. The biggest transactions in this category were a $978 million convertible issue by electric car maker Tesla, and a $545 million placement by Guodian Nanjing Automation, a Chinese technology supplier to generating and transmission plants.

Venture capital and private equity investment in clean energy came to $4.1 billion in 2017, down 38% on the previous year and the lowest figure since 2005. The biggest deals were a $400 million Series A round for Microvast Power System, a Chinese maker of electric vehicle technology, and a $155 million expansion capital round for Greenko Energy Holdings, an Indian wind project developer.

Asset finance of energy-smart technologies was $21.6 billion, up 36% thanks to increased installation of smart meters and lithium-ion batteries for energy storage. Corporate research and development into clean energy rose 11% to $22.1 billion, and government R&D was almost level at $14.5 billion. 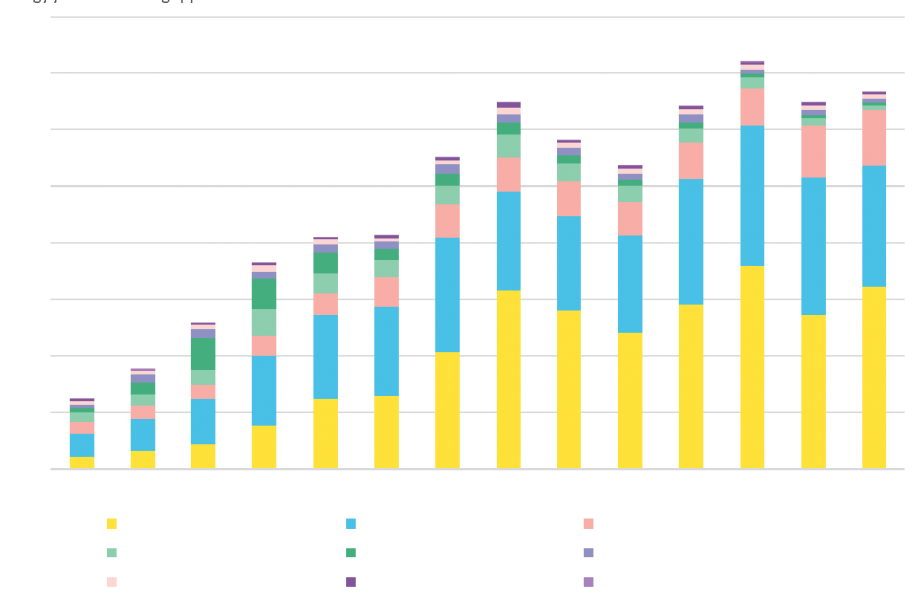 The 2016 figures reflect a significant revision, due to the arrival of new data on Chinese solar and wind and on global corporate R&D.

This acquisition activity totaled $127.9 billion in 2017, up 4% on the previous year and the highest ever. Acquisitions and refinancing of renewable energy projects rose 14% to a record $87.2 billion, while corporate M&A involving specialist clean energy companies fell 51% to $17.5 billion. Public market investor exits came to $7.4 billion, down 8%, and private equity buy-outs reached an all-time high of $15.8 billion, up sixfold on the previous year. The largest acquisition transaction of the year was the purchase of a 51% stake in U.S. ‘yieldco’ TerraForm Power by Brookfield Asset Management for $4.7 billion.

Abraham Louw, analyst, clean energy economics at BNEF, said: “It is notable that acquisition activity in clean energy has been in excess of $100 billion in each of the last three years. The fact that generating assets, in particular, are in growing demand from buyers is a sign of a maturing sector.”

Leveraging the most sophisticated new energy data sets in the world, BNEF synthesizes proprietary data into astute narratives that frame the financial, economic and policy implications of emerging energy technologies.