Contributed by | The American Council for an Energy-Efficient Economy

As the US government loosens environmental rules, states are investing more in energy efficiency and delivering increased power savings, according to the 2018 State Energy Efficiency Scorecard. This 12th annual report from the American Council for an Energy-Efficient Economy (ACEEE), released today, identifies the leaders (Massachusetts and California), the most-improved states, notably New Jersey, the states that lost ground such as Iowa, and those lagging behind, including North Dakota, West Virginia, and Wyoming.

The scorecard offers mostly good news about energy efficiency — the nation’s third-largest electricity resource. In response to federal efforts to freeze US vehicle and appliance standards, quite a few states worked to retain their own standards and to promote electric vehicles as well as zero-energy buildings. While some, like Iowa and Connecticut, saw legislative attacks within their states, others — including Virginia, New York, New Jersey, Colorado, and Arkansas — unveiled plans to boost investments in efficiency and clean energy, often driven by concerns about climate change.

The scorecard, which ranks states based on 32 metrics in six areas, has these key findings: 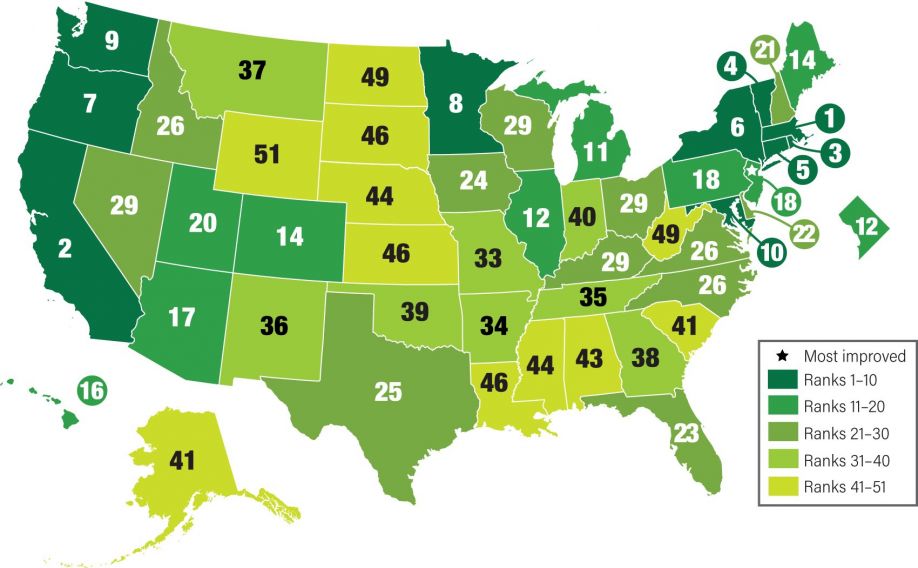 Iowa fell the most, moving down five spots to #24. This drop was due mostly to a bill signed earlier this year (SF2311) that imposes a restrictive cap on efficiency programs and allows customers to opt out of paying for some of them. Sixteen other states also fell in the rankings.

States increased investments in energy efficiency in the utility sector. They spent nearly $8.0 billion last year, up from $7.6 billion in 2016. The result was a 7.3% increase in electricity savings (nearly 26.5 million megawatt-hours) — enough to power about 2.5 million US homes per year.

Massachusetts' Governor Charlie Baker said: "We are proud Massachusetts leads the nation in energy efficiency for the eighth year in a row, and we will continue to adopt and pursue measures that deliver billions of dollars in savings to our residents and businesses each year. Massachusetts remains committed to leveraging energy efficiency and clean energy to meet climate goals, reduce costs and grow the Commonwealth’s economy.”

New Jersey’s Governor Phil Murphy said: “The fact that New Jersey has emerged as the most-improved state speaks volumes on the state’s commitment to becoming a 100 percent clean energy state by 2050. We’ve made enormous progress in very short order, but there remains more hard work ahead. I look forward to New Jersey’s continued leadership on making our environment healthier, cleaner, and more sustainable for future generations.”

Rhode Island’s Governor Gina Raimondo said: “I am proud that Rhode Island continues to be a national leader in energy efficiency. Every day, we’re continuing to make our energy supply cleaner, more affordable, and more reliable. These programs have saved businesses and families more than $200 million in the past three years alone, while at the same time helping us fight climate change and creating thousands of new clean energy jobs.”