Cheapest AND Cleanest: Renewables Are Winning

Originally posted by Nathanael Greene in the NRDC Blog

When President Jimmy Carter put solar panels on the roof of the White House 40 years ago, renewable energy resources were a niche technology both expensive and quirky. Well, as Carter’s buddy Bob Dylan would say, “The times they are a changin’.”

As 2018 closes, it’s now safe to say that clean renewable energy is at an inflection point. Cost is no longer the biggest challenge to greater adoption of wind and solar; it is now the rules of the power markets that often keep the cheapest options from winning.

As evidence of how renewables are cheaper, take for example, Northern Indiana Public Service Co. Indiana is the nation’s third-largest consumer of coal, after Texas and Illinois, and NIPSCO got nearly all of its electricity from coal-fired plants as recently as 2010. It’s now planning to shut down two of its three coal plants by 2028 and replace them with renewables. “Cost-competitiveness that has been evolving in the market, pointing toward the need to accelerate retirement of our coal-fired electric generation and replace it with lower-cost renewable sources,” it said.

Similarly, American Electric Power Co., one of the nation’s largest consumers of coal, told regulators it wants to build 900 MW of wind and solar generation.

“These decisions are being driven by economics, where the utility is saying renewable energy is the least-cost and less-risk option to customers," said Ben Inskeep, an analyst at EQ Research told E&E News.

And it’s not just utilities that are getting into the game. Corporate purchases of renewable energy have grown around the world, reaching 7.2 gigawatts in 2018 according to Bloomberg New Energy Finance. 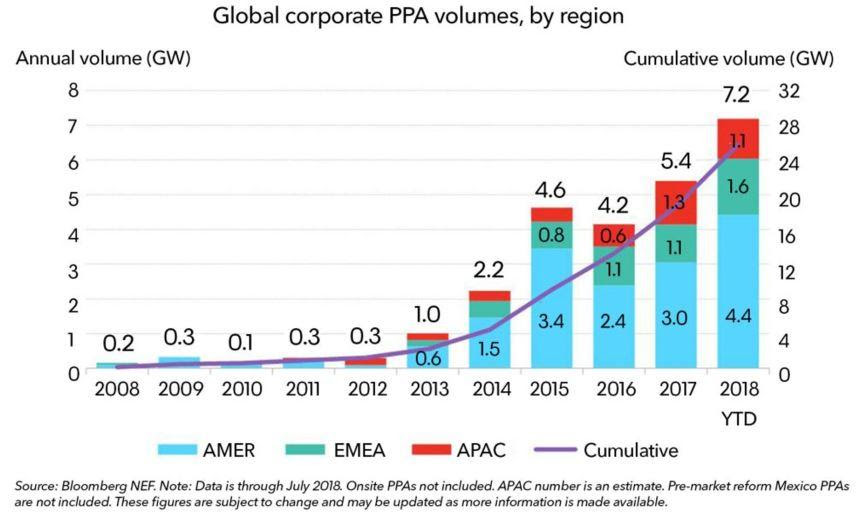 “Now that wind and solar are cost-competitive in so many places,” John Kostyack, the executive director of the Wind Solar Alliance explained to me recently, “the key challenge in accelerating deployment is persuading grid operators that reliability needs can be met with renewables and complementary technologies such as battery storage. Therefore, a top priority for wind and solar advocates is to reform market rules so that they recognize and reward renewables for the reliability services they provide to the grid.”

Think of the shift from costs to market rules this way: for years we have invested in research and development, incentives, standards and good old American ingenuity to bring down the cost of wind and solar. We were pushing a bobsled up a hill. Now we’ve passed the summit, and the sled is starting to slide down hill on its own. All of our effort is paying off. But the path down the hill isn’t smooth. There are logs and barriers because this path was built for dirty, old fossil fuels. If we clean up the rules of the market, wind and solar will keep building up momentum.

Still, if the fires in California and the hurricanes in Puerto Rico and the Southeast aren’t sign enough, the recent Intergovernmental Panel on Climate Change report and the 4thNational Climate Assessment drive home the urgency. Just because wind and solar are winning more and more, doesn’t mean we’ll get enough clean energy fast enough to stave off the worst impacts of climate change. The sled is moving on its own, but to win the race and save the planet, we need to be like a bobsled team that runs alongside the sled making it go faster and steering it down the hill. That means we still need incentives, standards, permits, and R&D. (This is part of why it’s so alarming to see the Trump DOE sitting on $600 million that it was supposed to spend speeding clean energy.)

Second, how hard we have work to speed up the sled—how much we have to spend on incentives and standards—depends on how smooth we make the hillside. If we get the market rules right, then standards will be easy to meet and incentives can be modest. If we leave the old fossil fuel-oriented rules in place or—as the biggest of markets is contemplating—make them even worse, then it could be almost as hard to get the sled down the hill as it was getting it up the hill.

So, what are the most important changes to the market to allow wind and solar’s lower costs carry the day? The Wind and Solar Alliance recently released a helpful report, and, to my eyes, there are three areas we should focus on:

The good news is that customers want this transition to 100 percent clean energy. In Vox David Roberts documented how utilities have tried all kinds of different messages to try and persuade customers that the current fossil-fuel heavy grid should be maintained. The more utilities argued their point, the more customers said they wanted renewable energy.

Our children and their children deserve to have a safe and healthy future. We need to do all we can to eliminate carbon pollution and green our grid. Luckily, the competitive costs of wind and solar mean we can both address climate change and grow our economy. We need to use energy efficiently, electrify our vehicles and buildings and get as much clean, renewable energy as fast as we can. The right market rules will make for a smoother ride and allow us to get the most out of all the rest of our clean energy policies.