The Asia Pacific Region is Strongly Positioned for Rapid Growth In the Renewable Energy Industry
Driven by strong growth in countries like China, India, Japan and Australia, the renewable energy sector in Asia Pacific is expected to grow rapidly in coming years. The continued support of the national governments to the clean energy projects even in this downturn promises a strong growth of the industry in future.

The wind power will account for the largest part of the renewable energy development in the region. China, India, Japan and Australia will together add approximately 57,400 MW of additional wind capacity during 2008-15. This represents a 47.4% increase over the total world wind power capacity in 2008. China and India are expected to be the major drivers of this growth. 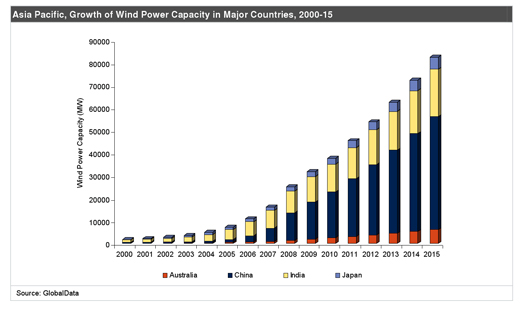 Apart from wind, other renewable energy technologies like solar, geothermal, small hydro and biomass are also expected to increase their share in the overall renewable energy market of Asia–Pacific.

China uses both Renewable Portfolio Standards (RPS) and feed in tariffs to promote renewables. In India there is no national level tariff or standards but the different states in the country have RPS targets and offer fixed tariffs for renewable electricity.

Australia and Japan have a national RPS scheme and different states in these countries also offer feed in tariffs. The Australian Government’s extension of renewable energy targets from 9,500 GWh by 2010 under the old Act to 45,000 GWh by 2020, as per the new law will give a major boost to the renewable energy sector in the country.

The New Zealand Government has set a set a target of 90% renewable electricity by 2025. Currently the renewables account for about 70% of the country’s total electricity generation. This implies an increase of about 20% by 2025. However, the government has still not come up with any specific policy measures to promote renewables. Indonesia and Russia lack a major policy framework for renewable energy development. 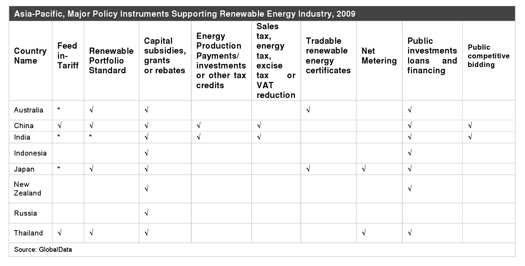 China to lead the Growth of Renewable Energy Sector in Asia Pacific
China will lead the growth of renewable energy in the Asia-Pacific. The country is expected to continue its strong investments in the renewable energy industry especially in the wind technology. The Chinese Government has established a target of generating 15% of country’s electricity through renewables by 2020. The wind power industry in China has witnessed a rapid growth in past years. The country has the largest wind power capacity in Asia Pacific and the fourth largest worldwide. The wind industry in the country will continue to grow in the future with the country expected to become the second largest wind power installer by 2015.

China is also trying to establish itself as a major player in Solar PV. In March 2009, the Chinese Government announced a new incentive of RMB 20 [US $2.93] per watt for solar PV projects with a capacity of 50-kilowatts and above. The move is expected to drive the demand for solar PV domestically.

The government has also initiated support measures for small hydro and biomass facilities. The moves are expected to promote the renewable energy development in the country and increase investments in the sector.

For further details or to purchase this report, please visit www.globaldata.com

About GlobalData
GlobalData is an industry analysis specialist company providing business information products and services. Our highly qualified team of Analysts, Researchers, and Solution Consultants use proprietary data sources and various tools and techniques to gather, analyze and represent the latest and the most reliable information essential for businesses to sustain a competitive edge. If you have any queries about this report or would like further information, please contact