Favorable policies and regulations drive growth in The Region.

The report is built using data and information sourced from proprietary databases, primary and secondary research, and in house analysis by GBI Research’s team of industry experts.

Financial Support by International Banks will Aid Renewable Energy Growth in the region
According to the Economic Commission for Latin America and the Caribbean (ECLAC), countries in this region would require an investment of $572 billion in the electricity sector between 2007 and 2030 to meet the energy demand. According to the United Nations Framework for Climate Change (UNFCC), more than 85% of the energy investment in this region will come from the private sector. International banks including the Inter-American Development Bank (IDB) are financing various power generation projects in this region. Since 2000, the IDB has financed more than $2.1 billion in renewable energy projects in the region, including hydro, wind and geothermal projects. The focus is to develop sustainable energy for the longer term through renewable energy sources. The banks also provide financial support for technical assistance programs for sustainable energy and energy efficiency.

Clean Development Mechanism (CDM) Projects Increase Renewable Energy Investment in the Region
The Clean Development Mechanism (CDM) is an arrangement under the Kyoto Protocol allowing developed countries to invest in projects that reduce greenhouse gas emissions in developing countries. The mechanism, which became operational in 2006, has been one of the key reasons for renewable energy investment in the South American region. Of the total 2,127 projects that were registered up to April 2010, 461 of them were registered for development in the Latin American region. More than 60% of the total projects relate to the energy segment, especially renewable energy sources. A combination of small hydro, solar, wind and biomass contributes to the majority of this investment. These projects are expected to increase the renewable energy investment in the region.

Environmental Protection, Increased Adoption of Renewable Energy and Other Benefits
Developed countries promote the use of renewable energy as a way to ease global environmental issues arising from the emission of greenhouse gases. With the depletion of fossil fuel resources, renewable energy has become the ideal solution to meet the long term energy needs. The price parity of wind energy generation over conventional energy sources is likely to favor the increased adoption of wind energy development. In addition to this, the adoption of renewable energy brings various benefits such as the creation of jobs and the revitalization of small and medium size industries. These reasons will play a vital role for renewable energy development in the South American region.

Renewable Energy Contribution in the Overall Energy Mix is Set to Increase in the Top Five Countries in the South American Region
The major part of power generation in the South American region is from renewable sources, especially hydro power. In the top five countries considered for this research, 63.5% of installed capacity is from hydro power, while 32.2% is contributed by the conventional thermal power. Nuclear and biomass represents about 1.4% and 2.4% respectively, while non-conventional renewable energy sources, such as wind and solar, represented less than 0.5% of the total energy mix. 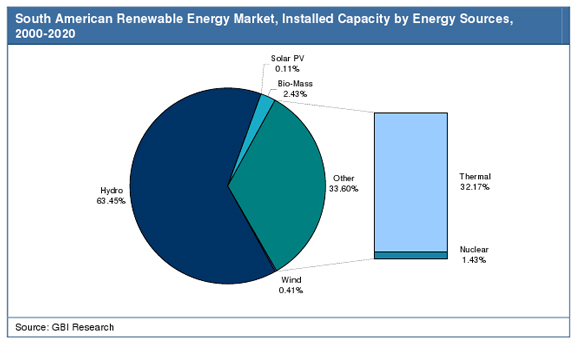 Our highly qualified team of Analysts, Researchers, and Solution Consultants use proprietary data sources and various tools and techniques to gather, analyze and represent the latest and the most reliable information essential for businesses to sustain a competitive edge. If you have any queries about this report or would like further information, please contact

Posted by Scottish Scientist on 04/30/17, 08:36 AM
Put Lake Titicaca for pumped-storage together with the Atacama Desert for solar PV, Patagonia for wind power and the Amazonian etc rainforests for biomass and conventional hydroelectricity and South America would seem to be blessed by natural renewable resources (and therefore riches) which are second to none in the world.