Peak oil? coal? gas? tar sands? shale gas? or any such? New discoveries seem to outpace all fears of early shortages. CO2 and AGW worries groundless? The jury is still out on that. Does that mean we can live free of any worries and carry on without any further need for doomsayers and troglodytes? Well yes, based on such questions. But could it just be possible that these are not the right questions to ask as they might produce wrong answers and consequently lead to wrong policies and investments?

Peak oil? coal? gas? tar sands? shale gas? or any such?  New discoveries seem to outpace all fears of early shortages.  CO2 and AGW worries groundless? The jury is still out on that. Does that mean we can live free of any worries and carry on without any further need for doomsayers and troglodytes?  Well yes, based on such questions.  But could it just be possible that these are not the right questions to ask as they might produce wrong answers and consequently lead to wrong policies and investments? 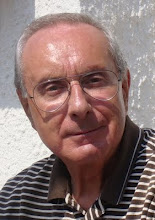 In any case, there are too many differing answers to all such questions in circulation to give me any sense of direction. This may, of course, be due to the limitations in my cranial capacities, but I’m still trying to alleviate whatever shortcomings I can identify there. But that needs motivation to try to do a Münchhausen and pull myself out of these quagmires.

Three sources proved most helpful. First of these is Norbert Wiener with his admonition:

“There is one quality more important than “know-how”’, and we cannot accuse the United States of any undue amount of it. This is “know-what” by which we determine not only how to accomplish our purposes, but what our purposes are to be.”

Our purposes can only be put into effect by design, i.e. through the purposeful designation of means to an end in ordered sequence.  And the best definition of the World-Total design problem remains that proposed to the International Union of Architects (1963 in Paris) by Buckminster Fuller:

“…to render the total chemical and energy resources of the word, which are exclusively preoccupied in serving only 44% of humanity, adequate to the service of 100% of humanity, at higher standards of living and total enjoyment than any man has yet experienced.”

Sustainability is a further concept to be considered; it may be undefined and encompass different things to different people, but one aspect is common to all notions: a timescale stretching through generations rather than any shorter term goals.

In that respect I am always reminded of President Eisenhower’s farewell address of 17 January 1961:

" ..... threats, new in kind or degree, constantly arise. Of these, I mention two only.....
• A vital element in keeping the peace is our military establishment..... In the councils of government, we must guard against the acquisition of unwarranted influence, whether sought or unsought, by the military-industrial complex. ...We should take nothing for granted. Only an alert and knowledgeable citizenry can compel the proper meshing of the huge industrial and military machinery of defense with our peaceful methods and goals, so that security and liberty may prosper together.

• In the same fashion, the free university, historically the fountainhead of free ideas and scientific discovery has experienced a revolution in the conduct of research. Partly because of the huge costs involved, a government contract becomes virtually a substitute for intellectual curiosity.

• Another factor in maintaining balance involves the element of time. As we peer into society’s future, we—you and I, and our government—must avoid the impulse to live only for today, plundering for our own ease and convenience the precious resources of tomorrow……”

With these considerations in mind, I chose the availability of energy – Fuller’s ‘energy slaves’ – and more specifically electricity, as one possible indicator for comparing worldwide standards of luxury – or lack of it..  I took a look at the world’s current electricity generation country by country (205 of them) together with their current respective populations, in order to arrive at comparable available electricity provisions on a per capita basis in the form of kWh/person-year [kWh/py].

I chose the current UK per capita level of 5546 upgraded to a desirable 7500 kWh/py (current US consumption is 12,587 kWh/py) as not too unreasonable a level approaching Bucky Fuller’s design definition, and then, country by country, the per capita energy levels were updated where necessary.   Lastly I adjusted all national expectations for the year 2100 pro rata in line with the estimated growth of current world population of ~7 billion to the UN median estimate for 2100 of ~9 billion.

Based on those assumptions, here are some of the numbers resulting:

Calculating the total annual requirement on the assumptions quoted, the 2100 world output would have to be in the order of 1,554 TW.

The results for World and Regions produce some astounding numbers, as shown in Table 1:

Comparing regions, the first surprise is that in spite of the region of Asia & Oceania containing China as well as India, the continent of Africa alone accounts for two-thirds of the necessary increase in the World's 2100 estimated electricity production.

This fact alone may explain Otto Edenhofer's statements referred to in my blog post at  http://cleanenergypundit.blogspot.co.uk/2011/10/west-is-facing-new-severe-recession.html.

See also:
Chinese loans raise spectre of colonialism, The Times, 20 July 2012,  p.40.
Dambisa F Moyo:Winner Take All - China's Race for Resources and what it Means for the World, Basic Books, 2012]

The sheer enormity of Africa is most easily visualized in the way shown by Diamandis & Kotler in their book Abundance: 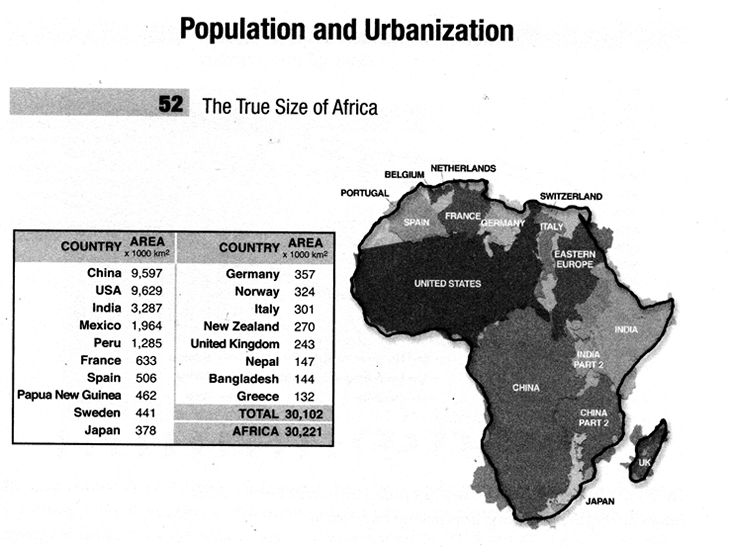 The next surprise (to me anyway) is the sheer number of hypothetical 1GW power stations on the assumption that all the world’s requirements of, say, 1554TW should be supplied by any one of current fuel sources (ignoring possible fuel shortages and the sheer magnitude of calculation results), arriving at further astounding numbers when also considering capacity factors as shown in Table 1.

Fuel considerations are becoming practically irrelevant compared to water requirements of conventional power stations, and astoundingly also to those of bio fuels. Hydroelectric electricity generation obviously uses water, but what is less often realized is that all other power stations are only gigantic steam engines also needing water, of course.  Another surprise becoming apparent is the amount of water required to prepare the various fuels before they even reach any power station – ranging from a ratio of 40:1 for nuclear to 2,415:1 for biomass. When looking at all these respective water requirements it becomes obvious that there is just no way that conventional power stations, or bio fuels – however mixed – could ever satisfy this hypothetical 2100 (or anytime) world demand, as here calculated, on account of their water requirements alone.  Obvious is also that this notional 1,554 TW production is certainly not achievable in about a century, if ever.  But even reducing the estimated water needs by two orders of magnitude, nuclear power would still require about half of total annual rainfall on land, biomass a staggering 655 years of annual rain.

Only sun and wind can satisfy the requirements of Clean Energy, for which I proposed this definition since I started blogging on the subjects of sustainability and energy:

The challenge is to propagate and implement Clean Energy production throughout 1st, 2nd, 3rd and 4th (favelas) worlds, employing all its technological, humanist and democratic dimensions.

Sun and Wind appear the only lasting choice for Clean Energy, as Table 1 and this further illustration from Diamandis’ & Kotler’s book Abundance illustrate: 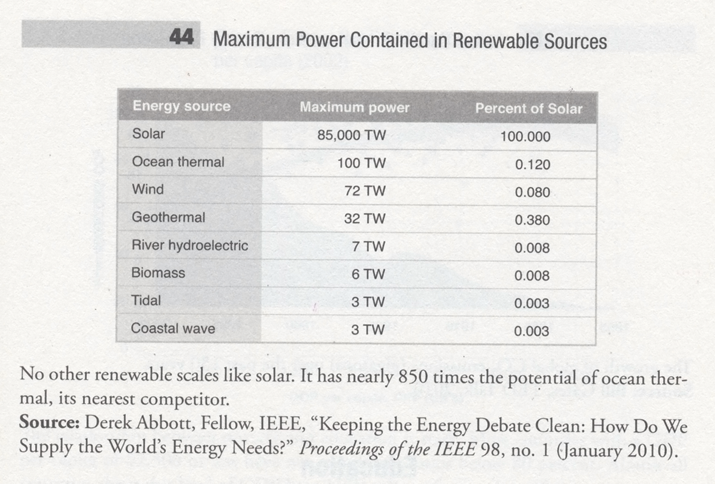 If nothing else, I hope that others using the sources quoted (or better ones than I could find) will make similar calculations to reach more accurate results than I produced here.

…I asked at the beginning, and it appears that the only answer that really matters is

"On this day, and the next day, and every other day, a scarcely conceivable 4000 trillion kilowatt hours of energy reached the top of the atmosphere as sunshine. And over the course of the day, that energy served to turn hundreds of millions of tonnes of carbon dioxide into food and living tissue. And as a result the world stayed alive.

US Energy Information Administration, Total Electricity Net Generation, by Region and Country, for 2009

WATER FOOTPRINT OF BIO-ENERGY AND OTHER PRIMARY ENERGY CARRIERS,

Argonne National Laboratory, US Department of Energy, Environmental Science Division ANL.EVS/R-10/5: Water Use in the Development and Operation of Geothermal Power Plants, 2011

Wikipedia, ECOFYS and other sources

"Eating the Sun - The Everyday Miracle of How Plants Power the Planet", Fourth Estate, London, 2009 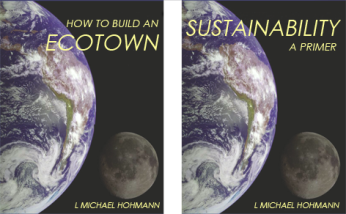