magine powering your house entirely from the sun, using the existing grid to store your excess electricity, zeroing out your SDG&E bill, as well as protecting the environment from harmful bi-products of conventionally manufactured electricity. That is exactly what Dr. James Rickard, a PhD astrophysicist and founder of Borrego Solar Systems, and his wife Grace did in 1980.

At that time almost all photovoltaic (solar electric) systems were sold to supply off-the-grid applications. The Rickards, who lived across the street from the nearest power line, chose to demonstrate the ability to produce their own electricity from an inexhaustible, abundant, free fuel source, THE SUN!

Today urban homes and businesses alike that are connected to the grid are choosing to guiltlessly pay less for already available solar energy, without the need for batteries. People are making sound residential and commercial investments in the sun, receiving higher tax-free returns than alternative investment possibilities.

"It is so wonderful to have my entire house powered with solar electricity," enthuses Dr. Melinda Nevins, D.O. of the Del Mar Medical Clinic who had an eight-kilowatt ground mount system installed for her home. "Even if it didn't pay for itself so quickly with the Rebate program, I would have gone solar just to preserve the environment," Dr. Nevins asserts.

"Watching that meter spin backwards is the best," exclaims Kurt Kersten, a Fountain Valley homeowner who hired Borrego Solar Systems to install his 3.7-kilowatt system last September. "I really do feel like I am part of the solution."

"Solar energy has finally come out of the woods and into the suburbs," notes Dr. Rickard with a chuckle. "We were just 20 years ahead of the curve."

Due to the California Energy Crisis, there is a more pressing need for energy independence--which has renewed interest in solar electricity. 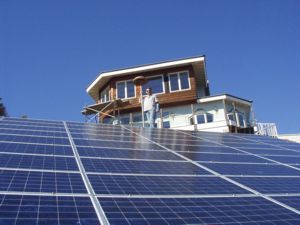 Californians welcome an additional 15% state tax credit for their solar investments; in addition, businesses are eligible for an extra 10% federal tax credit and accelerated depreciation-which can help business owners afford to stay in California.

"Every month I have to pay an electric bill to run my office. Now I don't pay SDG&E anything; instead, I make a monthly payment for my solar system," remarks Fern Platt, office manager for Lake Murray San Carlos Optometric Center. "By taking advantage of the incentives and tax credits, along with the accelerated capital depreciation, my monthly solar payments are far below my previous monthly electric bills." Platt adds, " It just makes good business sense. The solar system will completely pay for itself in less than four years. Plus, it helps the environment."

Utilities produce electricity by burning fossil fuels, thus producing carbon dioxide, a powerful greenhouse gas. Even the smallest system Borrego Solar has installed will replace the equivalent of one metric ton of coal, or 200 gallons of oil, or 30,000 cubic feet of natural gas each year. For example, a 1.2 kW system will prevent over 4,000 pounds 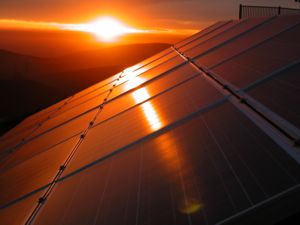 of carbon dioxide from entering the atmosphere annually. We could achieve the same effect by planting 10 mature trees every year for the next three decades.

Borrego Solar Systems' company mission statement is "To become a renewable energy leader by providing quality installations and long-term service." Borrego Solar has always been highly regarded as an honest and fair-priced provider of equipment, installation and service. The company is a member of the solar energy industry association (CalSEIA), the Better Business Bureau, and Chambers of Commerce of East San Diego County and Borrego Springs.

During 2002 Borrego Solar Systems installed 25 systems - a total of 800 photovoltaic panels with an electric generation capacity of 85 kilowatts - and its experienced project managers helped install the largest solar carport in the world for the Navy. 2003 sales are projected to grow by greater than 100%.

Borrego Solar now services most of California. They can be contacted at (619) 697-7183, or at www.borregosolar.com.