The diesel generators can be switched off completely during the day. This is unnoticed by electricity consumers but has huge benefits for the electric utility company and the region – and a pioneer for more diesel-free zones worldwide. 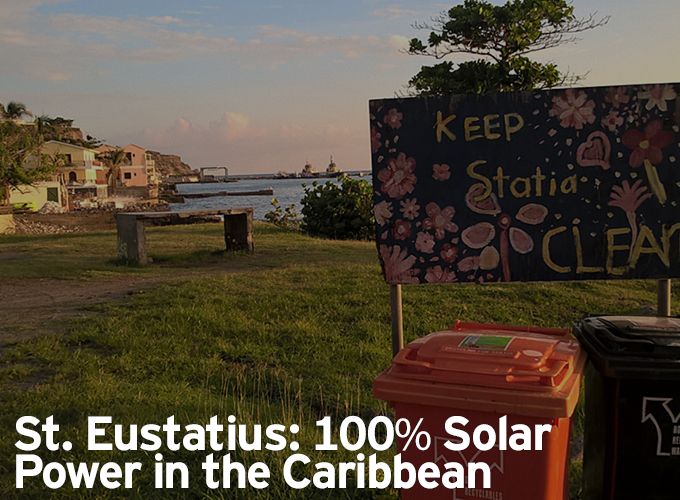 The diesel generators have fallen silent. No longer is the idyllic island of St. Eustatius tarnished by their drone and black diesel soot. And gone, too, is the need to buy expensive diesel fuel. In November 2017, this Caribbean island – a “special municipality” of the Netherlands – became that little bit more special thanks to the launch of a diesel-free daytime electricity supply.

“The most exciting and certainly the most emotional moment of the project was when we shut down the diesel generators,” said SMA project engineer Hamed Sadri, visibly moved by this memory. After all, this is exactly the moment that he and his international team had spent the preceding two-and-a-half years tirelessly working toward. “The best thing was the sudden silence that descended as the generators were turned off. The light didn’t even flicker as the job of supplying electricity was transferred to the hybrid system.”

Therefore, most of St. Eustatius’ 4,000 inhabitants will not have even noticed this emotional moment – and that is a good thing, because for them life will not really change. For the local electric utility company Statia Utility Company (Stuco), however, this moment represented a milestone: A clean energy supply that will save 1.7 million liters of diesel fuel each year. And, it will also save 4,500 metric tons of CO2 every year. Thanks to this new hybrid system, the little island of St. Eustatius has become a model for the entire Caribbean region.

The first expansion stage went into operation back in spring 2016 after just nine months: 1.89 MWp of solar power combined with 74 SMA Sunny Tripower 25000TL-30 inverters, the SMA Fuel Save Controller and the Sunny Central Storage 1000 helped to reduce the consumption of the diesel generators by as much as 800,000 liters of fuel annually.

In the second expansion stage, the project partners doubled the solar output to 4.15 MW and increased the battery capacity to 5,900 kWh. The key component is the newly developed Sunny Central Storage 2200 battery inverter with grid-forming characteristics. This allows the diesel generators to be shut down fully automatically without compromising the stability of the frequency in the utility grid. The SMA Fuel Save Controller is responsible for real-time energy and power management and synchronizes diesel and battery operation intelligently and fully automatically. Within milliseconds, the system compensates for the PV array’s power fluctuations caused by, for example, the exceptionally fast-moving clouds in this region in particular.

This means that the diesel generators can be switched off completely during the day. This is unnoticed by electricity consumers but has huge benefits for the electric utility company and the region – and a pioneer for more diesel-free zones worldwide.

And talking of fast-moving clouds, the system thankfully withstood hurricanes Irma and Maria, which swept across the region in September 2017, leaving total devastation in their wake.

The vision of reducing St. Eustatius’ dependence on fossil fuels was realized by the local electric utility company Statia Utility Company, the highly committed team of engineers from SMA, SMA Sunbelt Energy and the Dutch Ministry of Economic Affairs.

One integrated hybrid system with:

The heart of the project: the Sunny Central Storage 2200 battery inverter with grid-forming characteristics