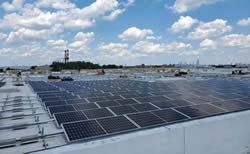 Last year, all eyes were on the state of New Jersey as they launched their Community Solar Energy Pilot Program. A program our PowerMarket team was and continues to be particularly excited about.

Roger Aitken for Forbes: Members of the market place can have their solar cells installed and rented to hospitals, factories, schools and rural communities in Africa and the Middle East, earning them income from solar powering the developing world.

Reporting by Vera Eckert for Reuters:  German battery maker Sonnenbatterie has launched a scheme to connect households with solar panels and other consumers, aiming to better distribute surpluses of the renewable energy and help members to become more independent of conventional suppliers. The start-up company hopes the scheme, called "sonnenCommunity", will boost demand for its batteries which store solar power, allowing owners to use the clean energy even when weather conditions are not favourable. SonnenCommunity takes the storage idea a step further, allowing solar power to be shared among its members. Sonnenbatterie said the scheme would initially target the 1.5 million solar power producers who, if they sign up to the community, will receive a battery storage system with a starting price of 3,599 euros ($3,812). But eventually, the offer will also be open to non-producers, it added. If the idea of battery-powered buildings takes off, it could pose a challenge to traditional utilities such as RWE and E.ON, which still derive the bulk of their power from big centralised power stations running on fossil fuels.   Full Article: