02/08/18, 09:31 AM | Energy Storage & Grids | batteries, research, Technology Discussions
Graphite has been the default choice of active material for anodes in lithium-ion batteries since their original launch by Sony but researchers and manufacturers have long sought a way to replace graphite with silicon, as it is an abundantly available element with ten times In addition to the technical lessons learned, the project team expects to draw conclusions regarding the changes necessary to the current regulatory regime that will enable the optimum usage of energy storage in unbundled power systems.

02/23/17, 08:51 AM | Energy Storage & Grids | batteries, research
The new battery provides an additional option for researchers, particularly in the area of stationary storage.

What is the Deep Decarbonization Pathway Project?

The Deep Decarbonization Pathway Project (DDPP) is a global collaboration of energy research teams from around the world, charting practical pathways to deeply reduce greenhouse emissions.

Gone with the wind: Surprising potential to improve reliability in wind power Science Daily:  Despite the rigors of scientific inquiry and the methodical approaches of the world's most talented researchers, sometimes science has a surprise in store. Such was the case when a group of researchers from the U.S. Department of Energy's (DOE) Argonne National Laboratory and the University of Akron discovered that a particular form of carbon coating not necessarily designed for wind turbines may indeed prove a boon to the wind industry -- a serendipitous finding that was recently highlighted in the journal Tribology International. Due to the strenuous environment inherent in wind turbine drivetrains, key components such as actuators, bearings and gears are prone to failure, meaning turbines require regular maintenance that helps drive up the price of wind energy. Prolonging the life of these components could greatly reduce the cost of wind power, the fastest growing source of energy in the world, thereby making it an even more attractive energy source.   Cont'd... By Tereza Pultarova for E&T:  German researchers have developed a new carbon-based active material that can be manufactured from apple leftovers and used to build better energy storage systems. The apple-based material can be used as the negative electrode in sodium-ion batteries, which are currently being researched as a more environmentally friendly and cheaper alternative to lithium-ion batteries. Instead of energy-intensive lithium mining, which frequently damages the environment, battery manufacturers in future could be using organic waste to make batteries. In tests, the new material discovered by researchers from the Helmholtz Institute Ulm of Karlsruhe Institute of Technology, has demonstrated ‘excellent electrochemical properties’, allowing the researchers to carry out 1000 charge and discharge cycles during which the apple-based battery demonstrated high stability as well as capacity.   Cont'd... By Brooks Hays for UPI:  Researchers at the University of North Dakota believe geothermal energy production should be a significant part of America's future energy portfolio. But to get the industry off the ground, proponents are looking to an industry not normally associated with renewable energy -- gas and oil drillers. "Oil- and gas-producing sedimentary basins in Colorado, Illinois, Michigan, and North Dakota contain formation waters of a temperature that is adequate for geothermal power production," researchers wrote in their new study on the subject, published this week in the journal Geosphere. Geothermal energy requires heat, and natural sources of heat lie deep within the ground. Gas and oil drillers have already built the infrastructure to access deep-lying natural resources. Of course, gas and oil drillers want gas and oil, not heat. But in their quest for gas and oil, they get heat nonetheless.  Cont'd... Rather than relying upon conventional cathodes that use lithium-ion intercalation chemistry, an inherently slow process, we exploit the fast redox-reaction properties of our polymer to enable rapid charge and discharge. 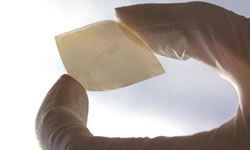 05/28/15, 01:49 PM | EVs and Fuel Cells, Other Energy Topics | research
The U.S. Department of Energy (DOE) selected a site near Fallon for its Frontier Observatory for Research in Geothermal Energy (FORGE), and $2 million in federal funds to launch the ground-breaking research project.

Jeremy Thomas for Inside Bay Area News:  In a christening hailed as a key moment in the effort to harness the sun's energy to create fuel, Lawrence Berkeley Lab officials on Tuesday unveiled a $59 million Solar Energy Research Center. Named after former Energy Department Secretary and Lab Director Steven Chu, the 40,000-square-foot Chu Hall will be a place of world-changing research in producing cheaper, more efficient renewable energy to replace fossil fuels, said Chu, who was honored for inspiring the mission. "This is one of the most important problems that science, technology and innovation really need to solve," Chu said. "It's a very big deal. ... We simply need to save the world, and it's going to be science that's going to be at the heart of that solution." The facility will be home to the Berkeley hub of the Joint Center for Artificial Photosynthesis, a Department of Energy-funded collaboration led by the California Institute of Technology that is attempting to create solar fuel as plants do by using sunlight and other catalysts to split water into hydrogen and oxygen gas and convert carbon dioxide into liquid fuels such as methanol and ethanol. The byproduct of producing such a fuel would be oxygen.

04/06/15, 03:12 PM | Solar & Wind, Other Energy Topics | Other Energy Topics, research, Software
Although individuals and companies have been leveraging distributed generation for decades, solar electric systems seem to be igniting a whole new level of interest among large and midsize businesses.