An attack on the supervisory control and data acquisition (SCADA) system that operates an offshore rig, oil well, pipeline or refinery-or against enabled Internet-of-Things (IoT) devices that deliver monitoring data to such systems-can have devastating consequences.

Only 10% of energy used in the U.S. comes from renewable sources-mostly hydroelectric energy. Worldwide, 85% of the energy comes from non-renewable sources. These sources, such as oil, natural gases and coal, will eventually be depleted.

With climate change ever-present on the agenda, a conundrum that governments and businesses face is: 'is it possible to create a greener world, whilst still allowing businesses to thrive'? Jess Shankleman for Bloomberg: Big oil is starting to challenge the biggest utilities in the race to erect wind turbines at sea.

US Military Moves Ahead With Renewable Energy Plan

Shoshanna Delventhal for Investopedia:  The Trump administration’s stance on climate change and the environment can be summed up by the chief White House strategist’s recent criticism of government support of green energy as “madness.” Despite a 180-degree shift from Obama administration’s environmental agenda, the Department of Defense, plans to move forward with a decade-long effort to “convert its fuel-hungry operations to renewable power,” senior military officials told Reuters. Yet apart from the controversial debate on climate change and the need for environmental protection, the Department of Defense has a strictly nonpolitical incentive to carry out the transition. Weaning reliance off petroleum means improved safety for U.S. troops and the American public.   Cont'd...

Making the switch: should the oil industry be moving into offshore wind?

Offshore Technology:  The oil & gas and renewables industries are often described as a dichotomy, the old way versus the new, the dirty versus the clean. In reality, from a technical and engineering standpoint, there are many areas of overlap, particularly in countries such as the UK, where a majority of renewable and non-renewable assets are located offshore. Building an oil rig in the North Sea is not all that different to setting up a wind farm. Both jobs require the ability to negotiate choppy waters and bad weather (often using remotely operated vehicles), and the technology to drill or pile foundations into the seabed. Communications and cabling infrastructure present a big challenge in both instances, as do the logistics of transporting and arranging huge components such as derricks and blades.   Cont'd... 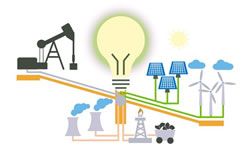 With the removal of fossil fuel subsidies and the continual drop in capital costs in renewables technology, the margins for the leading players in the renewables industry will increase.