Following is a statement from SEIA's President and CEO Abigail Ross Hopper regarding the Office of the U.S. Trade Representative's decision to impose tariffs on bifacial solar panels:

Schletter Group: "The trend is towards large projects" 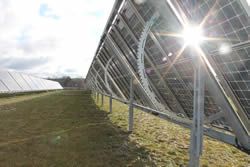 "Our talks with customers at the fair have confirmed what we have been observing for several months now in Europe, but also in our international markets: The trend is towards large projects," Schletter CEO Florian Roos said.

On April 29, LONGi announced that the front side power of its 72-cell Bifacial half-cut module exceeded 450W, achieving the world's highest power in this module type. This new record was tested and verified by renowned certification agency TÜV-SÜD.

Bifacial solar modules are becoming more popular in the solar industry. These modules can absorb sunlight from both sides as opposed to just one. Therefore, they can convert the light that is reflected behind the panel to increase the total energy production.